him before and began to feel uneasy

They went to the shops after dinner

& then rode to call at Mr Roachs

They were all in here this evening to

Ames & self called Swains, to see their child

Old Oliver must have been an admirer of Daniel Webster, else why would he mention the man in his daily weather journal? He wrote, “the 29th was a verry plesant warm day. it clouded up some toward night – Daniel Webster was buried to day”.

Daniel Webster, lawyer, diplomat, statesman, orator and Whig leader, was indeed buried on this day. He had died three days earlier after a fall from a horse and was buried with “impressive ceremonies”* at Marshfield, about 35 miles east of Easton. Considered by many to be one of the finest senators ever, Webster had also been a Secretary of State, U.S. representative, constitutional lawyer par excellence, and a devoted preservationist of the union. To the latter end, he co-authored and spoke eloquently on behalf of the Compromise of 1850, which included the controversial Fugitive Slave Act. As a result, he lost the support of many New Englanders; abolitionists washed their hands of him.

On this day in Boston, however, it would have been hard to find his enemies. According to a newspaper account the next day, a united citizenry mourned:

Boston never before presented – probably never will present – such a funeral aspect as was worn in her streets yesterday. Most of the stores and shops were closed, as well as the institutions, offices, and markets, and a large proportion of the city was dressed in the habiliments of wo. [sic] Though the work was only voluntarily the act of individuals, it was very general – Washington, Hanover, and many other streets being covered in black, interspersed with mottoes, flags, portraits, and other mementoes, as the taste of each led him to adopt and carry out.  It was one of the last acts which Boston can perform to express her sorrow for the loss of the great statesman, and it is praise enough to say that it was well and appropriately done. The streets were thronged nearly all the day, crowds of people being present from other places, – and our young men wore the insignia of mourning which had been adopted, and grieved countenances were observed at every turn of the street…*

She is quite low seemed to like my being there and

urged my coming to see her often and said she meant

gets well  said her Mother told her in her last hours

to come to me for advice and regretted that she

the morning has turned into a heavy snowstorm  Susan & self

A young neighborhood wife named Eveline Brett was ill, probably with childbed fever. Evelina went to stay with her during the night, taking her turn with family members and other neighbors to watch, suggesting that some must have thought that the new mother wouldn’t survive.

Modern historian Jack Larkin has described this neighborly service as “one of the commonest of rituals.”* In towns across New England, when someone was seriously ill, or “dangerously sick,” as Evelina noted a few days ago, “neighbors took turns staying through the night at the sick bed to allow exhausted family members to sleep. Watchers could administer medicine when needed, but, far more important, they provided a continuous comforting presence – as well as witnesses who could quickly gather the family around if death seemed imminent.” *

Evelina’s personal experience on this occasion was especially rewarding. The young mother confided that Evelina’s presence was truly comforting and that if she recovered, she hoped she could go to Evelina for advice. Happily, Eveline Brett would indeed survive her illness and, in the future, bring her baby by to visit the understanding woman who had given her such comfort.

tin dipper.  Susan washed the dishes  She does not like

to work very well, though she improves some

Evelina gave us one of her own recipes today, for sausage seasoned with salt, sage, savory and pepper.  She “tried the lard,” too, meaning that she boiled it down somewhat. And she probably used some of her new cookware in the process, while young Susie Ames helped grudgingly with the dishes.

As usual, Evelina cooked on a grand scale, inviting speculation as to just how much food her family ate. With a husband, three grown sons and a still-growing little girl all at the dinner table, we can imagine that 38 pounds of sausage didn’t last long. A month, maybe?

Old Oliver, meanwhile, was in forward gear.  After noting the “cool” and “chilly” temperature, he seemed please to write that “we were a digging a cellar to day for a cariage hous –“  Perhaps the planning for the new stone shops had inspired him to add another building – a carriage house – to the list of new constructions.

April 10th  Saturday  Worked in the chambers all the forenoon

Mr Colwell came after Orinthia she will commence her school Monday.

Olivers  Julia is at work there for Helen.  I have engaged her the

last of the week.  Heard that Mrs Brett is dangerously sick

Eveline Brett, wife of George Brett, a bootmaker, was a twenty-year-old who had recently given birth.  The baby had survived – at least so far – but she herself was “dangerously sick.”  She likely had come down with childbed fever.

Childbed fever, known medically as puerperal fever, is a postpartum, streptococcal infection of the mother’s reproductive tract. The fever was often fatal. For much of the 19th century, it was usually, if inadvertently, caused by attending doctors. At the time, doctors had no knowledge of germs and didn’t believe in hand washing. The prevailing attitude, as expressed by one Philadelphia obstetrician, Dr. Charles Meigs, was “Doctors are gentlemen, and gentlemen’s hands are clean.”*

It took a Hungarian physician named Ignaz Semmelweis to realize that women with home births had fewer cases of the fever than those women who gave birth in maternity wards. He determined “that washing hands with an antiseptic solution before a delivery reduced childbed fever fatalities by 90%.“*  Publication of his findings was not well received by the medical community, but he was right. 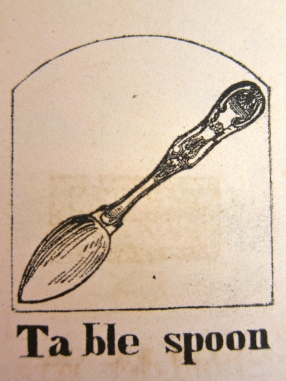 March [sic] 3rd Saturday  Have made a ribbon head

dress for sister Amelia  Orinthia & self went into

Edwins this noon for some fish chowder.  She gave us

had to wait upon ourselves. We excused her knowing

she was a young housekeeper and knew no better.  She

ought to come here and learn politeness  Called on Mrs

Brett.  her babe is nearly two weeks old. she is not very

Young neighbor Augusta Pool Gilmore invited Evelina and Orinthia Foss to midday dinner. This was a sweet gesture, perhaps intended to thank Evelina for her many kindnesses in welcoming Augusta to the village. The young bride may have been excited to debut her skills as a hostess.

However well-meant the invitation was, Augusta still had a lot to learn about entertaining. Evelina, a matron who had welcomed many guests to her dinner table over the years, saw much to judge wrong and in her diary took a snide swipe at the young woman. She criticized Augusta’s faux pas in laying out the wrong cutlery and failing to serve them properly.

While Evelina forgave Augusta her missteps, because the young bride “knew no better,” she also condescendingly noted that Augusta needed to spend time with the Ameses to “learn politeness.” Such scorn was perhaps exacerbated by the presence of Orinthia, who was always looking for ways to laugh. Innocent, inept Augusta was an easy target.

Evelina’s natural empathy returned in the afternoon. She visited other friends and called on another young woman in the neighborhood, Eveline Brett, who was doing poorly after having given birth.