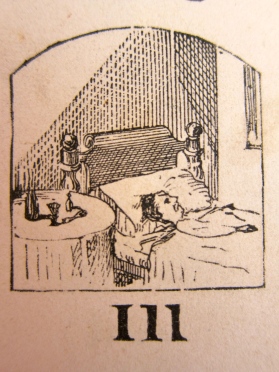 She is quite low seemed to like my being there and

urged my coming to see her often and said she meant

gets well  said her Mother told her in her last hours

to come to me for advice and regretted that she

the morning has turned into a heavy snowstorm  Susan & self

A young neighborhood wife named Eveline Brett was ill, probably with childbed fever. Evelina went to stay with her during the night, taking her turn with family members and other neighbors to watch, suggesting that some must have thought that the new mother wouldn’t survive.

Modern historian Jack Larkin has described this neighborly service as “one of the commonest of rituals.”* In towns across New England, when someone was seriously ill, or “dangerously sick,” as Evelina noted a few days ago, “neighbors took turns staying through the night at the sick bed to allow exhausted family members to sleep. Watchers could administer medicine when needed, but, far more important, they provided a continuous comforting presence – as well as witnesses who could quickly gather the family around if death seemed imminent.” *

Evelina’s personal experience on this occasion was especially rewarding. The young mother confided that Evelina’s presence was truly comforting and that if she recovered, she hoped she could go to Evelina for advice. Happily, Eveline Brett would indeed survive her illness and, in the future, bring her baby by to visit the understanding woman who had given her such comfort.