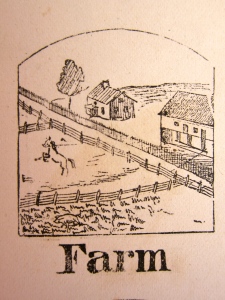 the stage  We had our breakfast about six Oclock

and I had my morning work most done

We went to Mr Torreys to make a call met Alson

and Lavinia coming.  Alson went back to the poor

farm & Lavinia went with us to Mr Ts  Alson came

tenement if he concludes to take it   Beautiful weather.

Breakfast at six a.m., at work by seven.  That was the way it was done in the small industrial town of North Easton. By the time Augustus and Hannah Lincoln Gilmore arrived, the men of the house were at the factory and Evelina had washed the dishes, dusted the parlor and instructed Jane McHanna on the menu for dinner and  tea, probably adding additional directions on finishing up the ironing or some other piece of housework.

Off she went, then, to the home of her old brother-in-law, Col. John Torrey, with their mutual nephew, Augustus, only to meet her brother (and Augustus’s father,) Alson Gilmore, en route.  Alson had brought one of his daughters, Lavinia Eveline Gilmore, into town for a visit with the Ameses.  Evelina was fond of her niece, so the visit promised to be pleasant.

Alson soon drove off.  Evelina said he was headed to the “poor farm,” which may have been a jest expressing her opinion of the old family place or perhaps an expression of concern over the economics of the Gilmore homestead.  Or Alson may actually have been on an errand to an Almshouse located in the center of Easton*, near the church that the family attended.  Perhaps Alson was in search of temporary laborers for his farm, although why he would need help in the middle of winter is questionable.  Maybe he had an official role in its oversight.

Many towns had poor houses where the indigent lived; Worcester, Massachusetts established one in the late 1830s in alarmed response to a rising influx of immigrants.  Some citizens were afraid of the diseases that immigrants might be bringing with them, so part of the impetus for setting up a poor farm or poor house or Almshouse, as they were also known, was to establish a discrete site for new arrivals, pending further inspection.

Incidentally, today was an anniversary that probably went unnoticed in the Ames family.  On this date in 1810, a baby named Angier Ames was born.  He was the fourth son of Old Oliver and Susanna Angier Ames, coming along after Oliver Jr. and before William Leonard.  He only lived to be fifteen months old, dying in the summer of 1811 of an unrecorded cause.  Old Oliver wrote no record of this child; did he think of him on this day, some forty years later?

*A shout-out to Frank Mennino, Curator of the Easton Historical Society, for his capable sleuthing about the “poor farm.”  As he pointed out to me, the Almshouse can be identified on an 1855 map of the town. Thank you, Frank!