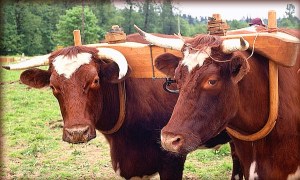 down to sewing on Susans work   She sewed with me

and counted stiches again  She will do pretty well

and keep quite steady when we count stiches

This afternoon went into Olivers to assist on Helens

quilt but found it most done.  Was called home

Sewing lessons for eight-year old Susie Ames continued today.  She seemed to be getting the hang of the needle as long as she counted her stitches.  This meant calculating and maintaining an equal number of stitches per inch of sewing. After the lesson was through, Evelina tripped next door to help with the making of a quilt. She discovered that the work was pretty well complete, however, which was just as well as she was called back home to sit with Reverend Whitwell, who came to visit.  More follow-up to the Sewing Circle meeting?

Outside, away from this cozy domesticity, Old Oliver was clomping around looking at oxen to buy.  He found a pair that he particularly admired and seemed pleased with his purchase:

“this was fair day  wind about west and not cold   I bought a yoke of oxen to day of a Mr Whitcom of East Randolph for $125-00 they are a handsom red + look a good deal alike.  he said they would be 6 years old this spring comeing   the off one girts 7 feet + 2 inches + the nigh one 7 feet   they weighed after drinking with yoke on 3220 lb.  the man  said he had them for twins”

And while Old Oliver dealt with the farming side of the Ames enterprises, Oakes and his three sons were no doubt busy at the shovel works, the young men continuing to learn the ins and outs of manufacturing, much as little Susie was learning to be domestic.   The futures of all four offspring were being lined up.