Julia Mahoney came to work on my dresses

Hannah Murphy commenced working for me

this day & Mrs Patterson is here and it

has been about as much as I can attend to

to wait upon the rest  If I had two or

three more it would be all I could attend to

Hannah Murphy, replacing the departed Jane McHanna, donned an apron this morning and “commenced working.”  Mrs. Patterson was still on the premises and the three women proceeded with the Monday chores, laundry included. Evelina was very busy tending to it all.

Yet today was Evelina’s birthday and she felt old.  We in the U.S. might scoff at the notion that 43 feels old; our current life expectancy for females is 81.  In Massachusetts in 1850, however, it was no more than 45. Who knew how long Evelina would live?  While she had the hopeful example of her hardy, octogenarian mother to emulate, she also would have remembered her two older sisters, both dead in their thirties. She may have considered the possibility that, like her mother, she could live to an advanced age. In fact, she would live to be 73; on this birthday, she had thirty more years in front of her.

At the shovel factory, Oliver Ames took his mind off his concern for the crops and focused instead on the arrival of Clark S. Manchester, who “came here to day from Fall River to build our stone shop.”* Mr. Manchester, 37 years old, was a native of Little Compton, Rhode Island, who had only recently moved to Fall River with his wife and two children. His expertise with stone work had led him to the Ameses, or they to him.

So the new building began, on the west side of Shovel Shop Pond. This location was different from the original and recently rebuilt factory, which sat at a lower edge of the pond in order to maximize the drop in water level. Water still powered the factory machines, and the new location to the west would still rely on water power from “just above where the Queset entered Shovel Shop Pond.”** But different from the old factory, this new Long Shop would accommodate a modern steam engine, a huge advance in technology. A new era in production was waiting to begin, and the stone buildings would reflect the change. 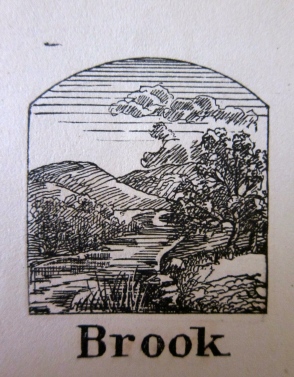 cook room worked all the forenoon getting

it ready and this afternoon in the garden

The gardener came up from the shop and

set out the currant bushes farther from

the brook and some Honeysuckle from Mr Swain

and Lakes   Rachel came to Edwins I called to

see her and carried Augusta some plants.

Evelina shuttled around the house and grounds today, keeping track of indoor painting and outdoor gardening and, most likely, everything in between. A gardener arrived on assignment from the shovel factory to plant some honeysuckle bushes that Evelina had acquired from two obliging neighbors, the Swains and the Lakes. The gardener also help her move some currant bushes back from Queset River, the little brook behind the Ames property.

The Queset, which historian William Chaffin found to be “a pleasant-sounding name,”* is only the most recent name for the stream that runs from north to south through Easton. It was first identified by that name around 1825.  In earlier days it was known as the Mill River, and, before then, the portion particular to North Easton was called Trout Hole Brook.  One would have to go back to the early 18th century, before water privileges had been claimed and dams built, to find trout in the stream.

The waterways of Easton have frequently changed over the years, as needs have altered and other sources of power been identified.  In 1852, water power was still essential to the shovel shops, and many dams – including the one that had almost breeched the dam during the heavy rainstorm of the previous week – were depended upon to produce the water flow needed to keep the factory going – and the currant bushes growing.

**Douglas Watts, at losteaston.blogspot.com, is a conservation writer who would like to turn the Queset back into an active trout stream.

1852  Storms again to day and nearly as hard

Mr Packard came at half past three and Mr Ames

went to the hoe & knife shop to raise planks

the water being very high  The highest that

has been known for years  Augusta spent

the afternoon  Worked all the forenoon cleaning

out grease from the buttery

The Nor’easter continued.  The Queset Brook, which ran behind the Ames compound, the Shovel Shop Pond and other local bodies of water threatened to overflow under the deluge of rain. The water came down “poringly” and, according to Old Oliver, “it raind about all day.”* To use a word that is not often encountered in the 21st century, a freshet was imminent.

A freshet is a sudden overflow of a creek or stream brought on by a heavy rain and/or the sudden melting of snow. It was a potential hazard that people who lived near waterways worried about every spring, and on this day the fears of such folks in Easton came close to being realized.

The water rose “the highest that has been known for years,” threatening to flood the hoe and knife shops. The men, led by Oakes Ames, responded quickly to adjust the wooden planks at the site of the dams on the pond. Local historians Dwight MacKerron and Frank Mennino corrected this editor’s initial misinterpretation that raising planks meant lifting machinery off the floor, the latter suggesting instead that:

“raising the planks referred to actually allowing water to leave the ponds under a controlled flow via a secondary sluiceway that was employed in most dams just for that purpose. In the case of the hoe shop there was a man made canal that would serve that purpose. It takes pressure off the dam, and might avert a catastrophic failure which would certainly have severe consequences.”

Sydney Packard may have been the man who came to assist Oakes. He was a 40 year-old father of eight and long-time employee of O. Ames & Sons.  Some twenty years later, Packard would be one of the pallbearers at the funeral of Oakes Ames.

So far in 1852, the Ames family had endured first fire and now flood, and their troubles were not over.

Thank you, Dwight MacKerron and Frank Mennino for your input on the workings of waterways of North Easton. 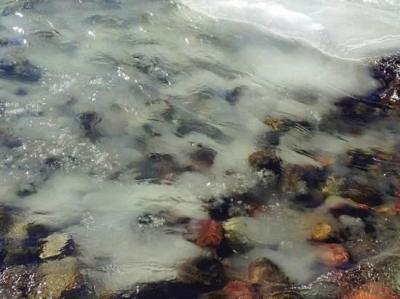 for Brown University.  Jane was able to do the

housework this morning & Mary has washed

I have been sewing with Mother  Gave the

furnace up to Ann this morning  It has been

so windy that we could not dry our clothes

Jane has starched the fine clothes to have

them ready to Iron tomorrow  Cold room all day

It’s not surprising that Evelina got Sarah Witherell’s servant, young Ann Orel, to start the coal furnace this morning, for it was a chore she disliked and the weather was so cold that there was no fooling around with getting heat into the house.  Old Oliver reported that “this was a fair day wind verry high from the north west + cold – a verry disagreeable day to be out in – there was an anchor frost this morning”

Anchor frost is a term for “a frost which causes ice to form along the bed of a running stream […] An anchor–frost can only occur when the temperature of the running water and the bed over which it flows is below freezing point. When this is the case, the rapidity of the stream is sometimes sufficient to prevent the swifter upper current congealing, while the lower current, which moves more slowly on account of the friction, becomes frozen to the bed.” *  Old Oliver knew all about running water and was probably not happy to see anchor ice forming in the Queset.

*Image of anchor ice, courtesy of The Aspen Times

this morning but she has the ague in her face

which prevented and lucky for me that I did

not go for about twelve Oclock Lavinia, Ann Pool,

and Francis, came and this afternoon Abby.  We all

rode to Edwins and Mr Clapps garden and to the ponds

Jane cleaned the […] buttery, and I was working

in the chambers when they came

Sarah Ames was sick once again, this time with what was probably a head cold, so a planned outing to Boston was called off. Sarah had been quite ill for much of the spring; perhaps she hadn’t given herself enough time to recover and was now suffering a relapse.

Normally, Evelina would have been disappointed to miss a trip to Boston, especially as she still needed to buy a bonnet, but a visit from a set of young relatives made for a happy alternative.  Her nieces Lavinia Gilmore and Abby Torrey, nephew Francis Gilmore, and a young friend of theirs, Ann Pool, arrived and rescued her from choring. With Francis holding the reins, presumably, the group rode north toward Stoughton, where they stopped at two farms to look at garden plants, one farm belonging to Edwin Manley, the other to Lucius Clapp.

They also rode by the ponds, including Ames Long Pond, which sits on the boundary between Easton and Stoughton. Most likely they also rode by Flyaway Pond which had been created only six years earlier, in 1845, to supply more water power from the Queset River to the shovel factory. Queset, according to historian Ed Hands, was “the most heavily used of all the drainage systems” in the watersheds of Easton.*  The shovel business would never have started in Easton had it not been for the Queset (Brook) River; O. Ames & Sons absolutely relied on it for decades.

Flyaway Pond is no longer configured the way Evelina and her companions would have seen it during their pleasant afternoon ride. It collapsed during a huge flood in March, 1968, wreaking havoc and causing considerable property damage.   As Hands points out, that 20th century flood washed away an important symbol of the Ames period in Easton, that of the control of the Queset River for commercial purposes.  Evelina couldn’t imagine that future for Flyaway Pond, of course; she could only enjoy riding past it and Ames Long Pond – and others, perhaps? –  in the spring air.