Mr W went home at half past three to

with him After they left this evening Mrs

Witherell & self called on Mrs Dow in Olivers

“[T]his was thanksgiving day,” wrote Old Oliver Ames, after a brief notation that the day “was fair in the morning but clouded up in the afternoon”. Evelina and her servants prepared a feast that fed at least fifteen people. The whole Oakes Ames family was there, naturally, and so was Old Oliver. Dining with them were Sarah and Emily Witherell, Reverend and Mrs. Whitwell, brother Horatio Ames and his youngest son Gustavus, the latter two having arrived from Connecticut the day before. At the “second table”  – which likely means a second seating – the servants partook. Catharine Murphy and Ann Shinkwin were presumably present, as was Michael Burns (Old Oliver’s coachman/ostler), his sister and Ann Orel, a young Irish girl who worked for Sarah Witherell.

Family gathered next door, too. The Oliver Ameses, meaning Oliver Jr.,Sarah Lothrop Ames and their children Fred and Helen, shared the repast with two of Sarah’s brothers, Henry and Cyrus, along with Henry’s wife Eleanor and long-time friends, the Dows. Quite a gathering, all told, as family members dined and visited.

Sarah Josepha Hale, the patron saint of Thanksgiving, describes her understanding of the origin of Thanksgiving in a novel she wrote in 1827 and republished in 1852:

“Soon after the settlement of Boston, the colony was reduced to a state of destitution, and nearly without food. In this strait the pious leaders of the pilgrim band appointed a solemn and general fast. […] The faith that could thus turn to God in the extremity of physical want, must have been of the most glowing kind, […] On the very morning of the appointed day, a vessel from London arrived laden with provisions, and so the fast was changed into a Thanksgiving.”

for Brown University.  Jane was able to do the

housework this morning & Mary has washed

I have been sewing with Mother  Gave the

furnace up to Ann this morning  It has been

so windy that we could not dry our clothes

Jane has starched the fine clothes to have

them ready to Iron tomorrow  Cold room all day

It’s not surprising that Evelina got Sarah Witherell’s servant, young Ann Orel, to start the coal furnace this morning, for it was a chore she disliked and the weather was so cold that there was no fooling around with getting heat into the house.  Old Oliver reported that “this was a fair day wind verry high from the north west + cold – a verry disagreeable day to be out in – there was an anchor frost this morning”

Anchor frost is a term for “a frost which causes ice to form along the bed of a running stream […] An anchor–frost can only occur when the temperature of the running water and the bed over which it flows is below freezing point. When this is the case, the rapidity of the stream is sometimes sufficient to prevent the swifter upper current congealing, while the lower current, which moves more slowly on account of the friction, becomes frozen to the bed.” *  Old Oliver knew all about running water and was probably not happy to see anchor ice forming in the Queset.

*Image of anchor ice, courtesy of The Aspen Times 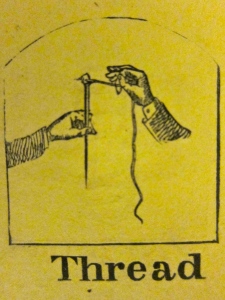 house! Not one here except Mr Whitwell and our own

to day  Isabell & Ann went to the funeral & took tea

with Jane after they came back.  I prepared enough

for 40 and think it is very provoking to have none

of the members  It is a delightful day.  Letter from Miss Foss

No one came to Evelina’s party.

“Very provoking,” indeed.  Mortifying, even, that not a single member of the Sewing Circle attended today’s meeting, unless you count Reverend Whitwell.  All the preparations, the baking, the cleaning, the spools of thread from Boston, all in vain.

Evelina took the rejection with a lacing of humor: “What a crowded house!”  Although disappointed and upset, she must have been grateful for the way the Ames clan filed in to partake of the feast. From Old Oliver (who almost never came to tea) and all three Witherells to Oliver Jr and Sarah Lothrop Ames to her own children and husband, presumably, the family closed ranks around her and filled her parlor with warm bodies.  Even the Irish servant girls on their way home from a wake partook of the spread of food – in the kitchen with Jane McHanna, of course.

So what happened?  Evelina said the day was delightful but her father-in-law, a dependable chronicler of the daily weather, described “the going” that day as “rough + bad” even though the weather itself was “fair”.  After days of terrible weather that had swung from rain to ice and back again, some of the absentee members probably couldn’t drive their wagons out of their own yards.  Bad roads might account for some, if not all, of the truancy.

Nevertheless, the incident raises questions about Evelina’s popularity and social standing.  She was married to one of the most important men in town, and she and Oakes enjoyed the friendship of many.  Is it possible that some of the women in the Unitarian Circle resented her, or felt themselves superior to her?  Where were the women she had grown up with? Were they jealous of her? Did she fail socially in comparison to her sisters-in-law, each whom had a more refined upbringing? Sarah Ames and Sarah Witherell never failed to attract a lively turnout for their Sewing Circles.

All these possibilities must have swirled in her mind.  The true test would come when the Sewing Circle met again at Evelina’s, many months from this day, this awkward day that Evelina surely hoped to forget.