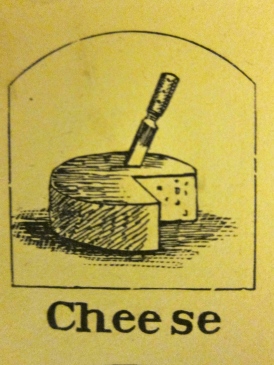 Sunday Dec 5th  have been to meeting all day

as usual. Staid in the meeting house

at noon with Augustus wife. Was very

sleepy this afternoon could not possibly

keep awake.  Have been writing John &

wife this evening & Mr Ames has written some

to pay Alson 25 doll for him, for butter & cheese

“[T]his was a cloudy foggy day wind north east, not cold.”* Evelina doesn’t mention her eldest son today. She went to church and “staid in the meeting house” with a niece-in-law, Hannah Lincoln Gilmore, during intermission, which was unusual for her. Most other Sundays she went out and socialized; today, not. Perhaps she was avoiding friends and neighbors who, by now, would have heard about Oakes Angier’s illness, and would have wanted to extend sympathy and advice to her, which perhaps she just couldn’t handle yet. She still didn’t have her own thoughts and feelings in order and was so exhausted that she couldn’t stay awake during the afternoon sermon.

As she had done before during times of stress, Evelina turned her attention to money, in this case settling a domestic financial transaction. She spent time in the evening attempting to reconcile an account between her brother John Gilmore, who lived out of town, and her other brother, Alson, who lived on the family farm. There had been, evidently, a three-way trade of “butter & cheese dried apples &c,” a transaction that involved Oakes Ames writing a couple of sizable checks. Might Oakes Ames have helped support some of Evelina’s relatives from time to time?

Wednesday Sept 22d Have been to Boston with Mrs

Witherell to get a Pianno  Have got to have

them made  Mrs Kinsley called to see them with

us  Met Mrs Wilson at Lintons to go to select

them. Dined at Mr Orrs while Mrs Witherelll

and a ring for Helen  Oliver came from Providence

A piano! And not one piano, but two, one for each side of the house. Both Susan Ames and Emily Witherell would be learning to play the instrument. Each girl would have her own piano to practice on. What luxury. What gentility. What fun.

With advice from friends such as Louisa Kinsley, Evelina and Sarah Ames Witherell selected and ordered the instruments in a Boston store. Spending money liberally, Evelina went on to purchase gifts. For her other sister-in-law, Sarah Lothrop Ames, she bought a cloth to go on top of the piano that those Ameses already owned. For Catharine Hobart, a young family friend who had caught the eye of her son Oakes Angier Ames, she bought a gold thimble. And for her niece Helen Angier Ames – Catharine’s classmate – she bought a ring.

Did her husband Oakes know that Evelina was spending so much money? Did her father-in-law? While her husband must have given his approval, it’s unlikely that Old Oliver would have approved of such a spree. Yet both those men were often generous within the family; in that respect, Evelina was just following suit.

We note today, too, that Oliver (3) returned from a few days at a fair in Providence, where he no doubt saw friends and former classmates from his two semesters at Brown University. We might imagine that he was missing school.

but was very sleepy and had a head

ache came home at noon & did not

return, was writing and looking over my

accounts untill the rest returned from

meeting, good business for the Sabbath

I think. Mr Ames & self went to see Augustus

Evelina was plagued by a headache, so didn’t return to the afternoon service at the Unitarian church. As she had done before on a Sunday afternoon, she went over her household accounts. Like many a competent householder, she kept a ledger of cash transactions that detailed the weekly or monthly expenses of running the house. It’s highly unlikely that she had any money of her own; everything would have been paid for by her husband, Oakes, who either saw that she had a regular allowance or gave her funds as needed. She would have been careful with every penny, probably more careful than he was.

On this Sunday, she describes the review of her accounts as “good business for the Sabbath,” but in an earlier entry she had hesitated to do it, fearing that it was inappropriate. Accounting was quiet work, certainly, but it was still work, and that was forbidden on Sunday. By defending the activity in her own diary, she shows us that she was still feeling a little guilty for doing it.

Socializing wasn’t forbidden, however, and when her husband, Oakes, came home from church, the two went out to see Evelina’s nephew, Alson Augustus Gilmore, who had been quite sick with fever. Her brother, Alson, and his wife, Henrietta, meanwhile, “came after” the maid, Mary, and, evidently, took her home with them. 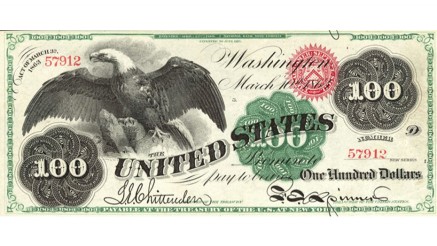 Another stormy day and no one been to meeting

Mr Swain called & got some of Harpers Magazines

over my accounts.  Have been taking off the boys accounts

for the last year and Susans.  Mr Ames gave me

one hundred dollars.  It has been a long dull day

with me  Mr Ames has been in part of the time

Evelina focused on money today, as she “perhaps ought not” to have done. It was Sunday, after all, and reviewing one’s personal account was too much like doing work on the day of rest. But she couldn’t get to church because of the weather, so she found a useful way to spend time in an otherwise “dull” day.

The gift (or allowance?) that Oakes Ames gave Evelina may have provided the impetus to examine the family finances. The $100 was most likely given in the form of specie, or coins. At this period in American finance, gold and silver coins contained their exact value in metal. Thus Evelina would have received precisely $100 in gold or silver, at least for the time being. That equation of value would soon change, as the influx of gold from California was upsetting the market. Gold prices would go down and silver would go up.

Paper money at this time was limited to bank notes, and the government-issued $100 “greenback” in the illustration above would only come into existence during the Civil War, when the U.S. needed to generate cash to fund the Union Army.  That $100 bill, controversial in its day, laid the foundation for a permanent U. S. currency not based on a silver or gold standard. 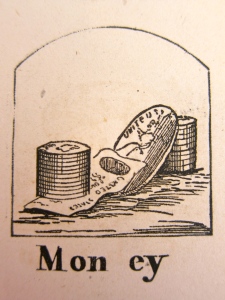 Feb 13th  Thursday  This morning put the parlour in order

and went down to the store with the intention of calling

on Miss Eaton on my way back, but her Mother & brother

office with account of butter and other things sold.  Mr Peckham

his books.  Very pleasant but ground rather wet.

Moving past yesterday’s humiliation, Evelina put her parlor back together first thing this morning and left the house, all by herself.  A walk to the little village on a fair day must have felt good, muddy ground notwithstanding.  She went right to the company store.

The Ames family made shovels, obviously, but their overall enterprise was never limited to manufacturing alone  – witness their eventual involvement with the Union Pacific.  They also made money from the operation of a company store, one that had been owned previously by a former partner of Old Oliver named Colonel David Manley.* The shop was right in the village of North Easton where shovel employees and others could purchase ordinary household items – muffin tins, for instance – dry goods like flour and personal articles. Evelina shopped there from time to time, and on this day she may have picked something up.  But she also sold things through the store, which explains why later that day she made her way to the Counting Office to collect $30.78 for “butter and other things sold.”  She had a little stream of income for herself, a source of satisfaction for any homemaker, and material consolation for a wounded spirit.

On her walking rounds, Evelina stopped in at the Holmes residence to call on Miss Eaton, a neighbor who is slowly declining. When she learned that Miss Eaton had family visiting, she deferred her call until another day.  Evelina and her sister-in-law Sarah Lothrop Ames have been looking after Miss Eaton from time to time and will continue to do so as her health fails.  The Ames women were dutiful in looking after the sick among the families of employees of the shovel shop.

* For more information on this store, you might want to read Easton’s Neighborhoods by Edmund C. Hands.  Among extensive historical information about the town, he offers some great context about early business days in North Easton.