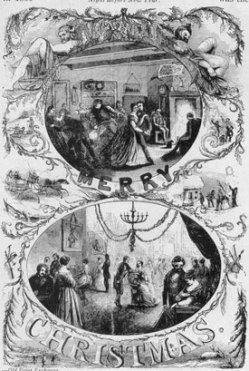 bedroom &c a thorough sweeping and was about the

house at work a greater part of the forenoon

knit on my hood when I seated myself at work

read some in Ladys Book which I have

me a linen collar that her mother made for a

Emily Witherell delivered a Christmas gift from her mother, Sarah Witherell, to her Aunt Evelina, a gesture that may have caught Evelina off guard.  In practice, the Ameses had not been in the habit of observing Christmas, finding this religious celebration too festive for their Puritan-derived tastes. Yet times were changing and, in future years, Evelina would become both a recipient and giver of Christmas presents.

Evelina’s transition from being suspicious of Christmas to celebrating it was stimulated by various factors, not the least of which was its promotion in her favorite magazine, Godey’s Lady’s Book, the same magazine whose subscription Evelina renewed today. The periodical recognized and encouraged the holiday’s appeal to its well-heeled readers, many of whom would have read Charles Dickens’ A Christmas Carol, published less than a decade earlier. Unlike Unitarian (and one-time Congregationalist) Evelina, a growing number of Godey’s readers were less hide-bound to a doctrine devoid of celebration. The influx of Irish Catholics, who did honor the holiday, influenced some of this change, too.

While many in the nation made preparations for Christmas, a terrible fire at the Library of Congress in Washington, D. C., resulted in the destruction of nearly two-thirds of their holdings. Included in the loss was most of Thomas Jefferson’s original library.**