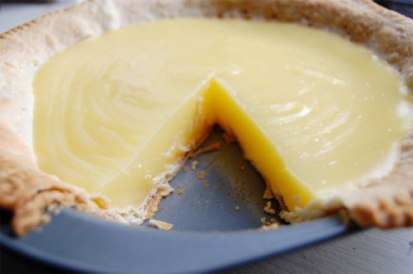 and sew but quite early Mr Jessop & Linds

from Sheffield and Fullerton from Boston came

and were here to dinner & tea and so

I had to go to cooking instead of sewing  Made

some Lemon & custard pies &c  It has been

excessively warm and the flies have come

in swarms  Frank went to carry the gentleman to

“[T]he thermometer was up to 96,”* recorded Old Oliver Ames in his daily journal.  “[E]xcessively warm,” indeed.  It was certainly disagreeable for Evelina to be in the kitchen baking pies on such a day, wearing an apron and a long-sleeved, full-length dress over a chemise and petticoat. Hot.

Many 19th century cookbooks carry recipes for lemon custard, lemon pie, and the like, indicating that lemons were a familiar and reliable ingredient, either imported like coffee, tea and sugar or shipped north from the southern-most states. The Shakers of Ohio, in fact, had a famous recipe for lemon pie that was more or less a tart marmalade within a crust. Evelina probably followed a recipe that was more like lemon custard inside a crust, such as the one suggested by Sarah Josepha Hale:

Boil in water, in a closely covered sauce-pan, two large lemons till quite tender; take out the seeds, and pound the lemon to a paste; add a quarter of a pound of pounded loaf sugar, the same of fresh butter heated to a cream, and three well-beaten eggs; mix all together and bake it in a tin lined with puff paste; take it out, strew over the top grated loaf sugar.*

We can imagine that the pies met the approval of the gentlemen from Sheffield and Boston who came to dinner and tea.