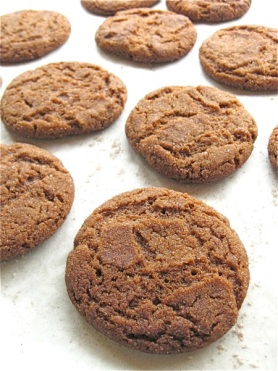 July 8th Thursday  This forenoon cut out a night dress

from Mrs Ames pattern and was busy in my

chamber made some cake & ginger snaps and

baked them in Mrs Witherells oven  This

This was a hot day for baking, but Evelina nonetheless made “cake & ginger snaps” in her sister-in-law’s brick oven. No doubt she served some of the goodies later in the day when the Ames clan gathered for tea. There didn’t seem to be any special occasion for the tea, except that a cousin, Almira Ames, was visiting. Rather, it was perhaps Evelina’s turn to entertain the family. As Evelina’s grandson, Winthrop Ames, later pointed out, “[e]very week at least, and usually oftener, one household would invite the others and their visitors to tea; and the whole Ames family might assemble…”*

Ginger snaps were pretty standard fare at such occasions. Evelina baked them regularly. In recipes from that time, they’re often referred to as hard gingerbread. Sarah Josepha Hale includes a “receipt” for them in The Good Housekeeper from 1841:

Rub a half a pound of butter into a pound of flour; then rub in half a pound of sugar, two table-spoonfuls of ginger, and a spoonful of rose water; work it well; roll out, and bake in flat pans in a moderate oven. It will take about half an hour to bake. This gingerbread will keep good some time.**