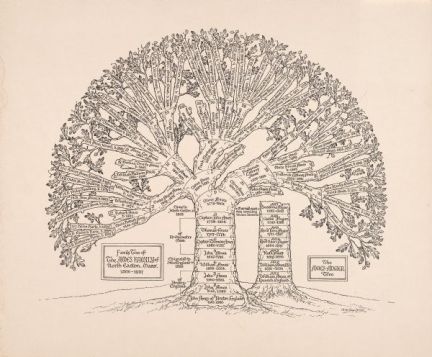 Evelina made no entry today in her diary, for reasons we’ll never know.  Too hot? Too cross? Too busy? Too much laundry? We can only guess.

Instead of commentary, we’ve posted an image of the Ames family tree familiar to many Ames descendants, especially those who own copies of Winthrop Ames’s 1937 family history, The Ames Family of Easton, which includes a fold-out version of this illustration.  The tree features the lineage of the two Ames brothers who stayed in North Easton: Oakes and Oliver Jr., but doesn’t include the other sons and daughters of Old Oliver and Susannah who also produced issue: Horatio, William Leonard, Sarah Witherell and Harriett Mitchell.

Some readers have asked for clarification on who was who within the family. What follows is a list of the children and grandchildren of Old Oliver and Susannah.  More information about this group and their descendants can be found in a detailed family geneaology produced by William Motley Ames and Chilton Mosely Ames in the late 1980s.

Old Oliver and Susannah’s children and their children in birth order:

William Leonard Ames and Anna Pratt Hines had one child:

Two other children of Old Oliver and Susannah, Angier Ames and John Ames, died without issue.