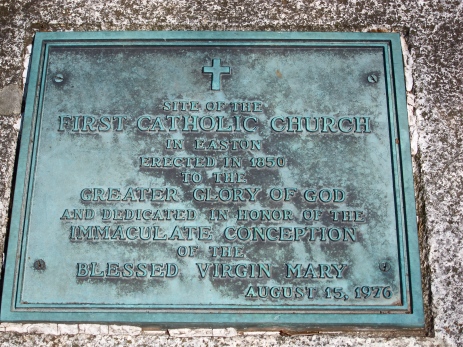 Sunday Aug 3d  Went to the consecration of the Catholic

Church dedicated to The virgin Mary. The bishop &

around the house and sprinkled the foundation with the

water and then the aisles & walls and some of the

congregation got a sprinkling. This afternoon went to

Oakes A carried Louisa Swan to the hall under our

By 1850, Easton’s Catholic population, which had been almost non-existent before about 1840, now numbered approximately 150, primarily due to the influx of Irish Catholic immigrants, many of whom went to work at the shovel factory.  The Irish had no church of their own, and had been gathering for worship in a hall belonging to the Ames family on those Sundays when an itinerant priest came to town.  The congregation had outgrown that facility, however, and needed their own house of worship.

The Ames family donated a plot of land on Pond Street to the Catholics so that they could build their own church.  The stone plaque in the photograph above commemorates that first church, built in 1850 and consecrated on this very Sunday in 1851.  Evelina and, presumably, other members of the Ames family attended the consecration, a ceremony to which Evelina paid close attention.  They went back to their own Unitarian church in the afternoon.

AND DEDICATED IN HONOR OF THE