Tues Nov 23  Catharine & self have been mending

shirts &c all day  It being very stormy I

thought it a good time to mend

Susan & self have been in to see them

Ann has done the housework and cut

“[T]he ground was white with snow this morning, but was a raining + took it all of[f] by noon there was a bout half an inch of water fell”* on this late November day; people in Easton had yet to see a serious snowfall.  Although the storm kept Evelina indoors, the lack of snow was actually a help to travelers like Fred and Helen Ames, who were making their way home for the holiday.

Fred Ames brought his Aunt Evelina a gift. What was better, that she received a crumb brush or that her nephew spent 75 cents on it? That amount would translate to about $17.50 in today’s (2015) market. Either way, she was pleased with the gift, which she would no doubt place with pride on her dining table.

Most of us modern readers probably don’t keep a crumb brush handy at our dinner tables, although we’ve seen modern versions in use in restaurants. But then, most of us probably no longer dine on pressed and laundered tablecloths at home, at least on a regular basis. Placemats are more common. (Readers weigh in here, please.) But in 1852, formal dining on snowy white tablecloths was aspired to as the middle class rose above their agrarian past of eating without linens. The dining room itself became more popular as families found the means to support more servants and rise to a style of living that involved a clear separation between cooking and dining. The notion of today’s open kitchen, where guests sip wine on stools and watch the hostess  – or host! – cook dinner would be absolutely foreign to Evelina. Our lack of damask would shock her and her contemporaries. 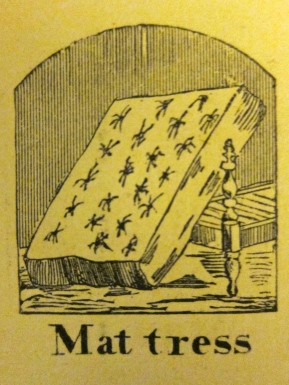 Thursday May 20th  Went to Bridgewater quite early this

morning and did not get back until

after four Oclock  Bought an oilcloth

for O Angiers chamber and engaged some

husk mattress  Called into Edwins after

I returned  Have a bad head ache.  Very pleasant

Today’s shopping objective: new floor coverings for the dining room and a bedroom, as well as “some husk mattress.”  At least one of the mattresses of the house was due to be restuffed or entirely made over.

By the mid-nineteenth century, mattresses were stuffed with various materials, including cotton batting, wool, horsehair or corn husks. As they had been for centuries, mattresses were placed within a wooden bed frame and set atop a latticed support of rope or leather or wire. The box-spring that we use today would come along a few decades later.

It’s a little curious that Evelina “engaged some husk” for a mattress, when she could have selected cotton or something finer, like down. Feathers would have required poultry, however, which the Ameses didn’t keep, and were expensive to purchase. The husks, probably harvested the previous fall from a corn harvest and dried over the winter, would have been less expensive.

By the end of the day, Evelina had a headache. Perhaps her long day of shopping or a bumpy ride to and from Bridgewater set her off.  With so much time spent outside, a high pollen count could have been the culprit, too, and might also account for Susie Ames’s recent nose bleeds.