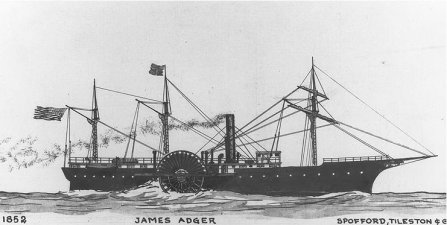 Wednesday Dec 15th  Got into New York about 5 Oclock

had a very pleasant night  Breakfast at

the Astor House & then called on Mrs A L Ames

OAA & self dined at the Clifford House  Mrs Ames

went with us to see Oakes A start for Charleston

who were there on the same errand  Mr Ames

settled at the Astor & went to the Clifford House

Evelina Gilmore Ames woke up in New York City on this December weekday, far away from her needle and thread. After a last meal with Oakes Angier, she went to the waterfront to bid farewell as he boarded his vessel. With her husband and some family friends – including Charles Swain, brother of John H. Swain of North Easton – she waved goodbye to Oakes Angier, not knowing if she would ever see him again.

Emotions ran high, no doubt, but they must have competed for attention with the immediate scene around her. The sheer scale of din and clamor on the docks would have been like nothing Evelina had experienced before. A comparable departure from New York Harbor for Cuba was recorded by fellow New Englander Richard Henry Dana in 1859. He describes a steamer as she is ready to sail:

[H]er decks are full, and the mud and snow of the pier are well trodden by men and horses. Coaches drive down furiously, and nervous passengers put their heads out to see if the steamer is off before her time; and on the decks, and in the gangways, inexperienced passengers run against everybody, and mistake the engineer for the steward, and come up the same stairs they go down, without knowing it. In the dreary snow, the newspaper vendors cry the papers, and the book vendors thrust yellow covers into your face – “Reading for the voyage, sir – five hundred pages, close print!”[…] The great beam of the engine moves slowly up and down, and the black hull sways at its fasts. A motley crew are the passengers. Shivering Cubans, exotics that have taken slight root in the hothouses of Fifth Avenue, are to brave a few days of sleet and cold at sea, for the palm trees and mangoes, the cocoas and orange trees, they will be sitting under in six days, at farthest. There are Yankee shipmasters going out to join their “cotton wagons” at New Orleans and Mobile, merchants pursuing a commerce that knows no rest and no locality; confirmed invalids advised to go to Cuba to die under mosquito nets and be buried in a Potter’s Field; and other invalids […] and here and there, a mere vacation maker, like myself.”*

Three ships were cleared to sail on December 15, 1852, from New York Harbor: the Steamer James Adger, the Bark Caroline and the Schooner Aramis. The latter two vessels cleared but did not depart, perhaps waiting for more favorable wind or tide. The steamship, the hybrid of its day, was new, having been built that year in New York. Not having to wait for wind or tide, the James Adger cleared and sailed, its destination being Charleston, South Carolina, a port of call on the way to Cuba. To date, we don’t know which ship Oakes Angier was on, but we might imagine that he – and his father, who no doubt played a roll in making these arrangements – opted for the newest, fastest vessel. Steamships were the way to go.

And off he went.

*Richard Henry Dana, To Cuba and Back, 1859, courtesy of Echo Library

Thursday 26th Aug  This morning Mrs Mills got a hack and

carried us all out to ride.  We had a fine view

of the Lake and town, was riding over an hour

and returned to Mrs Stetsons and all dined there

Called into a shop to see stone ware made

Passed the afternoon at Mrs Mowers and there

we had a very pleasant time  Charades & Tableaux

got home about twelve

Evelina filled her last full day in Burlington with social activity. She and a group – Almira Ames, Sarah Lothrop Ames, Fred and Helen, and Oakes Angier, too, presumably – were “carried” out for a ride, during which they admired the “fine view” they got of Lake Champlain and the town itself. It was a pretty place. But no amount of imagination in the mind of anyone in the hired carriage could have foretold that one day a steamboat named for Oakes Ames would be plying the waters they were gazing at.

In 1868, in fact, the 244′ Oakes Ames, built in the Napoleon B. Proctor Shipyard, would be launched from Burlington. Designed to ferry railroad cars from Burlington across the lake to Plattsburgh, New York, the steamship was commissioned by the Rutland Railroad, for whom Oakes Ames was a director and one of the line’s “firmest friends.”** In 1874, the ship would be renamed and repurposed for passenger service. Yet the newly christened Champlain II would last in service only until running aground in July, 1875. Although the incident produced no fatalities, the ship’s hull would be dashed beyond repair. Today, the boat is a famous wreck in the water.

Steamship and railroad deals being in the future, Evelina and the group continued to enjoy themselves on this pleasant day. They dined at a friend’s house and visited a stoneware shop. In the evening they all played charades and tableaux, popular parlor games in which participants acted out words or situations, or created still scenes of familiar subject matter, respectively. Such games were particularly popular at Christmastime.