Willard Lothrop preach as he calls it

at this methodist meeting house but he

was not able to make out much  We called

at Mr Torreys & Augustus’ at noon

Edwin & wife were here to supper but

went home before dark.  Have read the

With the factory shut or, in this case, with the carpenters away, Sunday was a quiet day in North Easton. This particular Sunday “was cloudy all day + in the evening + night there was considerable rain – wind north east.”* The Ames family usually went to church at a meeting house in Easton Center, but on this Sunday Evelina did something different.

Her family may have gone to the usual Unitarian service with Reverend Whitwell, but Evelina and her sister-in-law, Amelia Gilmore, stayed in the village and attended a service at the Methodist meeting house. This tiny church, since moved to another location, sat in an intersection of North Easton now known at The Rockery. So small was it that one visiting preacher declared he could “spit into the gallery from the pulpit.** Its intimate dimensions were just right for another session of Spiritualism with Willard Lothrop, who preached in his own personal way.

Evelina and Amelia may have been motivated to try to communicate with departed family members, but they came away disappointed. Lothrop failed “to make out much.”  Although Lothrop and others in Easton continued to advocate for their belief, Evelina pulled away from it. This is her final entry on the topic of Spiritualism. 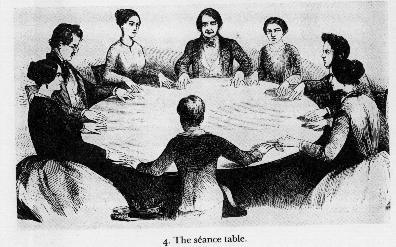 came this evening  He went into a trance

and preached  told Abby she was a sympathetic

medium  Mother & self had a nice quiet

time in the forenoon  Mrs Witherell

came in awhile  Altered some dickeys

After a quiet morning of sewing, Evelina and her mother were entertained at the end of the day by an unusual event in the Ames parlor.  Willard Lothrop, self-proclaimed Spiritualist, visited at the Ames home where he “went into a trance and preached.”  If it wasn’t a seance, it was close. Lothrop believed he could communicate with the departed. Was there a particular person from the past – a Gilmore relative, for instance – whom Lothrop was trying to reach?

According to historian William Chaffin, “modern Spiritualism” developed in upstate New York around 1848, and spread from there. As noted previously, Easton produced its own adherents who “displayed mediumistic powers,” including Willard Lothrop. “Circles were held.  There were knockings and table-tippings and experiments in the production of musical sounds, etc.  It was not found necessary to import trance speakers, for native talent in that direction was soon developed.”** Abby Torrey, Evelina’s twenty-one year old niece, was in the parlor, too, for this session. Lothrop reached out to her, believing that she had a gift for spiritual telepathy. 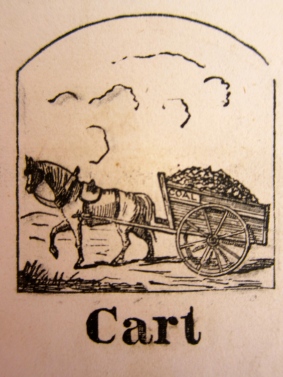 1852 Feb 25 Wednesday Was at work about the house untill

about ten and had just got seated at my sewing

when Mother & Alson came  They were here to

dinner and this afternoon mother & self spent

at Willards. The young folks had company

Oakes & Frank are there this evening and were

having a lively time when we came away  Elizabeth

Williams was here this forenoon.  She & Susan went to

“[T]his was a warm day and thawd so much that it made the carting bad,” grumbled Old Oliver in his daily journal.  Despite the soft road bed, however, Evelina’s brother Alson Gilmore traveled by wagon or carriage to bring their mother into town from the family farm. The two came to midday dinner at the Ames’, after which Alson presumably went on his way. Mother and daughter went on to visit Willard Lothrop – Evelina had been seeking his company quite a bit lately. Under his influence, was she becoming a Spiritualist?

While the notion of communicating with the dead intrigued her, Evelina’s interest in Willard Lothrop may have been more sociable than religious.  She comments on the “young folks,” – her sons Oakes Angier and Frank Morton Ames among them – “having a lively time.” All ages seemed to be moving around today attending various gatherings that must have helped dispel some mid-winter gloom. Never mind the mud; the hint of warmth in the air must have been preferable to more snow.

morning  Have given the sitting room a thourough

sweeping & have made the front chamber bed

and put the room in order.  Also the entry.

After dinner called into Olivers to see her mother

Willard said he wanted to come to tea but the spirits

would not let him.  Orinthia came this evening

The house was quieter this morning than it had been for some time.  Evelina’s middle son, Oliver (3), had returned to college. She tidied up, putting away at least some of the sewing things that had been pulled out for mending Oliver’s clothes. She swept and put various rooms “in order.” She must have felt a sense of accomplishment and, perhaps, that contradictory combination of relief, satisfaction and sadness that follows the departure of a child for school.

After midday dinner, Evelina walked next door to greet Sally Williams Lothrop, mother of Sarah Lothrop Ames. A different Lothrop came to call (whether at Evelina’s or Sarah’s is unclear): Mrs. Solomon Lothrop and her son Willard. Willard was invited to stay for tea but declined. As a medium and a follower of Spiritualism, he felt that “the spirits would not let him.”

Willard Lothrop was not alone in his belief that the possibility of communication exists between the living and the dead.*  William Chaffin makes note of the existence of Spiritualism in Easton, where “interest in this subject first appeared on the Bay road. In 1850 Asahel Smith, Amos Hewett, Willard Lothrop, and others became much interested in the matter. Several Easton people soon displayed mediumistic powers.” Evelina was clearly intrigued by the premise.

While he was gone I mended his coat

to the other part of the house about ten &

stoped till about two Oclock – I have spent

most of the afternoon there.  Bridget here to work

Went in the evening to hear Willard preach

Oakes Ames bought a “place” today at auction, an event that must have been somewhat informal given that Oakes didn’t wear his coat.  The property he bought may have belonged to a shoemaker named Charles Thayer who died around this time.  There were many Thayers in Easton, however, and had been for generations.  Where was this property?  And what did Oakes do with it?

Although the date was Friday the 13th, Evelina would have had no concern about bad luck as our modern superstition that the date is unfavorable was not yet established. In the 19th century and before, some cultures did consider 13 to be an unlucky number, coming as it does after the number 12, which tends to be auspicious.  Others thought that Friday was an unpromising day of the week, not a good day to start a trip, for instance.  But it wasn’t until the late 1860s that the two bad omens merged and became an ominous symbol unto itself.

Interesting that Willard Lothrop, Easton resident, shovel worker and Spiritualist, spoke this evening to a group – and that Evelina went to listen. Spiritualism (which, Chaffin* reminds us, is “not, strictly speaking, a religious denomination,”) had a foothold in Easton and would for years to come. In a curious juxtaposition, a later officer of the “First Spiritual Society of Easton,” would be Fred Thayer, son of the very Charles Thayer whose property we think was sold today.

of my rocking chairs.  Mrs Witherell brought in her work

and staid about two hours.  Willard Lothrop made

quite a long call.  Told Mrs W that he did think at one

he could hardly muster courage &c &c  This evening have been

mending stockings & reading the papers.  Mr Ames has been

to Boston bought him a pr of Robbins.  Brought home watch

While Oakes made his usual Saturday trip into Boston, Evelina and Sarah Witherell sat together in the Ames’s front room, sewing. Evelina was completing a horsehair back and cushion for a rocking chair.  Horsehair upholstery was common in the 19th century, the haircloth being both durable and lustrous, plus relatively inexpensive.  Evelina, accomplished housewife that she was, would naturally have undertaken to do this work herself.

With their work boxes at hand, the two sisters-in-law sat, sewed and conversed until the arrival of a visitor, Willard Lothrop.  Mr. Lothrop, an employee at the shovel shop, was something of a character.  He was a self-declared medium and an impassioned advocate of spiritualism. (He may also have been related to both Evelina and her other sister-in-law, Sarah Lothrop Ames, through the Lothrop family line.  There were many Lothrops in the area.)

Spiritualism was a practice that claimed, in Reverend William Chaffin’s words, “that there is a vital connection between the seen and the unseen worlds by which communication between the two can be maintained.”  Though hardly a new concept, this American iteration took root in the mid-19th century and gained strength for a time after the Civil War.  Many in North Easton, especially those living along the Bay Road, were interested in it.

Lothrop, the purpose of whose call at the Ames house is not disclosed, focused his attention on Sarah Witherell, confessing that he found her unapproachable.  No mention of Evelina being inaccessible!  Lothrop offers us a rare, backdoor insight into the character, or the bearing at least, of the Ames sister of whom we know the least.  Except for her presence in Evelina’s diary, Sarah Witherell left almost no trace behind, no diary, no stories, no grandchildren, no legacy.  In a powerful, visible, active family, she may simply have been its most private member.

After Lothrop left, what did the ladies talk about?  And what are the “Robbins” that Oakes Ames bought in Boston?