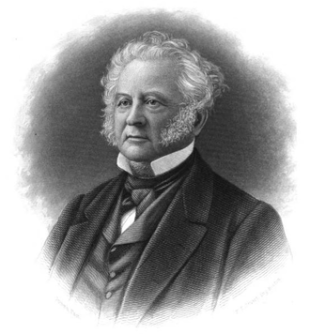 Jan 15 Thursday  Spent some time this forenoon in reading

the papers and fixing Susans work & pasted some pictures on

Howard with Mrs S Ames.  Evening to a lecture on

education by Mr Upham of Salem at the meetinghouse

hall. a very good lecture and a goodly number

present for a snowy evening.  Had two tripes from father.

The guest lecturer at the meetinghouse was, presumably, Charles Wentworth Upham. A minister and politician from Salem, on the north shore of Boston, Upham had traveled no small distance to deliver a “lecture on education.”  Well spoken and well read, he had written, some years before, a history of the witch trials in Salem. Lately, however, Upham had been speaking on the progress of normal schools, which were schools that taught teachers. Education was on his mind.

Also on Upham’s mind was politics. He was a Whig, which may have been his connection to the Ames family and Unitarian congregation in Easton. Previously Upham had been a member of the Massachusetts State Senate, and within the year would become Mayor of Salem. From 1853 to 1855, he would be a representative to the U.S. Congress, but would fail to be reelected.

Upham was married to Ann Holmes, a sister of Oliver Wendell Holmes, Sr. He had been at Harvard with Ralph Waldo Emerson with whom he corresponded later in life.  Their friendship faltered, however, over Transcendentalism, which Upham disliked. Upham also famously acted against Nathaniel Hawthorne, leading the local fray in getting Hawthorne, a Democrat, fired from his politically-appointed job at the Salem Custom House.

Some disliked Upham; Charles Sumner called him “that smooth, smiling oily man of God.”* What did the Ameses think?