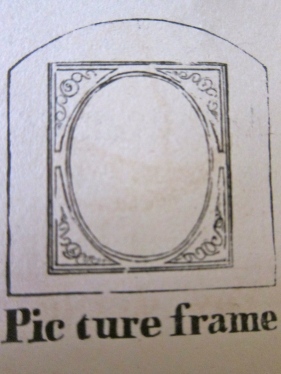 Susan washed the dishes this morning and I was

at work about the house most of the forenoon

staid to dinner  Called into Olivers and Edwins

with her  She returned to Joshua C Wm about three

and went home in the stage  Oliver tried to get

the coloured engraving smooth in the frame but could

not  Mended Oakes Angier a vest

The new week opened with the usual domestic arrangements: Jane McHanna doing laundry, Susie Ames washing dishes and Evelina choring “about the house” in the morning.  A visitor, Mary Williams, arrived and stayed for midday dinner, then departed mid-afternoon on the local stagecoach .

With her son Oliver’s help, Evelina finished hanging the prints she had bought the week before in Boston. The new pieces of art were quite au courant; etchings, lithographs, and engravings were appearing on parlor walls across the country.  New printing technology – the same that promoted the appearance of so many new periodicals and serial novels – made the production and distribution of art prints easy. The subject matters varied from historical (like the famous image by Emanuel Gottlieb Leutze of Washington Crossing the Delaware, first painted in 1851) to religious to geographical to sentimental.  They were decorative and affordable, and the middle class flocked to buy them.

Subject matter, of course, was important; Evelina had purchased one print about Halloween (or All Hallows Eve as it was known). The prints had to be attractive and look handsome on the wall. But the decorative frames that went around the art work counted, too, and “were often considered more important than the prints themselves.”* It’s too bad that Oliver was having difficulty making one new print fit properly in its frame.