Satellite image of a Nor’easter

April 19th Monday  It rained very fast all day and

about noon the rain beat in the side lights

of the entry, and parlour windows   had to take

back the carpet a little from our window put

dishes under the windows and caught a good

deal of water.  Have cut down my Verbenas

and Petunias fixed a skirt of a dress for

A powerful Nor’easter storm beat into New England this day.  Both Evelina and her father-in-law described the rain as “fast,” Oliver further elaborating that the rain came in sheets, “not in drops.”*  Evelina (and Jane McHanna, most likely) had to deal with water coming in through the side light panels on either side of the outside door. They scurried, too, to pull back the carpet from the windows and put dishes on the floor to catch some of the water beating into the house.

The wind howled and “[t]he storm continued all day , a part of the time pritty fast,” reported Old Oliver. Everyone stayed indoors, no doubt, yet Evelina reports cutting back some of her plants, which suggests outdoor work. That couldn’t have happened on a day such as this, however, so perhaps the verbenas and petunias had wintered-over in pots inside the house, and it was those that she cut down.

Gardening was on her mind, of that much we can be sure. She prepared a skirt to wear outside when she was in her flower beds, probably “repurposing” an old dress for the task. Her handwriting was rushed and incomplete when she wrote the last sentence of today’s entry; she inadvertently omitted to cross the “x” in fixed, leading this editor to conclude that she had “fired” a skirt.  Not so, thanks to a sharp reader who came up with the correct version. 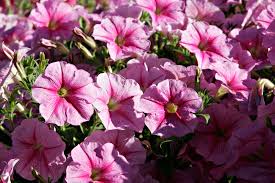 Tuesday  Worked all the forenoon and part of the afternoon

weeding the flowers.  Got some Petunias at Mr Savages

The gardener has been to work in my flower

garden most all day weeding and fixing the

beds, has made them wider  This afternoon have

The weather was fine enough that sisters Sarah Ames Witherell and Harriett Ames Mitchell took a long walk north toward Stoughton with their houseguest, Miss Eaton. They headed to Edwin Manley’s garden, a much-visited spot, to see what he had growing. Being on foot, it’s doubtful that they purchased anything to bring home. They may have ordered something to be delivered, however.

In the morning, Evelina went out to look at flowers, too, at the nearby home of William Savage, a shovelworker, and brought home some petunias.  Petunias, a great garden favorite in the latter half of the nineteenth century, originated in South America, appeared in Europe by 1800, but had only recently become available in the United States. Petunias were still so exotic, in fact, that they didn’t appear in the list of annuals in Breck’s Book of Flowers, published in Boston in 1851. How did Mr. Savage come upon them?

The Ames’s new gardener, who had been with the family for almost a month, weeded the flower beds today and worked at making them wider. Evelina’s parlor garden was becoming more and more ambitious. And for some reason, Bridget O’Neil, a servant, worked at Evelina’s today. She had been working next door at Oliver and Sarah Lothrop Ames’ house.  Where was Jane McHanna?