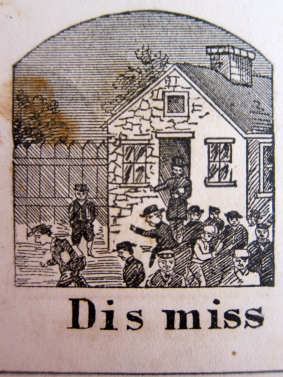 Wednesday Dec 31st  This morning sit down early to knitting

my hood  Have it all finished ready for the lining.  About ten

Oclock went into the school with Mrs. Witherell.  Mr Brown

has closed his school to day.  Passed the afternoon & evening at Olivers

Susie Ames and Emily Witherell may have been happy today to reach the end of their school term. Class, dismissed!  1851, dismissed!

Just how the Ames family celebrated the departure of the old year and arrival of the new, we don’t know. Old Oliver, with his usual terse assessment of the day, merely noted that “this was a cloudy day and some cooler + misty + foggy.” The cool mist he saw would develop into a huge rain storm over night, preventing folks from moving around much.

A group of friends and relatives gathered for tea next door at the home of Oliver Ames, Jr. and his wife Sarah Lothrop Ames. Besides Evelina and Oakes, at the party were Reverend William Whitwell and his wife Eliza, Reverend William Reed and his wife Abigail, Jason Guild Howard and his wife Martha, and Evelina’s brother Alson Gilmore and his wife Henrietta.  In just a few more years, a group like this might have sung the beloved  Auld Lang Syne to mark the occasion. In fact, a version of Auld Lang Syne, written in 1855 and called Song of the Old Folks would become “the tradition of the Stoughton Musical Society to sing […] in memory of those who had died that year.”*

Out with old, in with the new. What a year it would be for the Ames clan.

Thursday Nov 13th  Have been cleaning the draws in

the beaureaus and have papered the closet beside

the fire place and painted some boxes &c

Ellen Meader […] has been making Susan a visit

this afternoon  The Stoughton band have been

in the neighborhood this evening. They marched

Mr Ames has been to Boston

Stoughton, Massachusetts, has a wonderful musical legacy, most famously the Old Stoughton Musical Society, a choral group that has been active since 1786. Known in its first hundred-twenty years simply as the Stoughton Musical Society, some of its members referred to it as the “Grand Club”*. When it celebrated its centennial in 1886, Lt. Governor Oliver Ames and Governor George D. Robinson were two notable attendees at a celebratory concert. Oliver (3) was very fond of music; he even took singing lessons in his youth. He must have enjoyed the musical evening.

The long and revered history of the Old Stoughton Musical Society sheds no light on the existence of a Stoughton marching band, however. Evelina’s entry may be the only known mention – at least to date – of such a band.  On this day in 1851 it marched and played instruments through the village of North Easton, presumably after the factory had closed for the day. Why did it stop at the Ames’s house? What was the occasion? Surely the music it played was a welcome change from the usual clanging and hammering that emanated from the shovel shop.

Other than this pleasant interlude, Evelina’s day was ordinary.  While her daughter Susie had a friend over, Evelina cleaned, papered and painted.  Later in the day – perhaps as she accompanied little Ellen Meader home – she had “coffee &c &c” at the home of Ann and John H. Swain.  Oakes Ames spent the day in Boston.