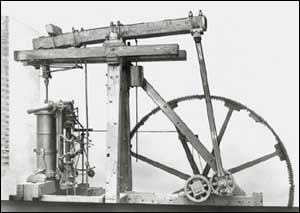 and I sat down quite early to my sewing

This afternoon we spent at Augustus

Mother & Louisa are going to spend the

night  Mr Torrey & Abby were there

Mr Ames & Oakes A went to West B

I have been sewing on the skirt of Susans

This was a typical Monday as far as domestic matters were concerned. In the morning, the women washed clothes and mended stockings. In the afternoon, they went calling on relatives in the village. But it was a red-letter day at the shovel shop, as men arrived to install the a steam engine – the first – at the factory.

Old Oliver seemed excited: “this was a fair good day for the season the man came here to sett up the enjoin four of them.” The company’s first steam engine was placed in the new Long Shop by the Corliss Nightingale Company of Providence. It was a technological change that Oliver had resisted in the past, but had since come to accept. His son, Horatio, in particular, had urged the change for several years in order “to counter water supply limitations”* In January, 1847 he had written his father and his brother, Oliver Jr., on the topic.

I shall think a steam engine […] of sufficient power to carry 3 hammers and carry all your polishing works shearing and punching and Bisbees works […] would be cheaper and better […] It is too bad that you do not keep nearer supplying the market with shovels when a comparatively small expense would do it in addition to your other works.”*

I enclose you with […the] price and terms for a steam engine. It will do you no hurt to compare cost of this and water power. it will take about one ton of coal a day to drive it and the repairs will be no more than a water power if as much[…] You never need fail for water either too much or too little […] I am altogether in favor of this plan over water power in your situation.”*

Horatio was right, as it turned out. The new engine was the beginning of modernization for O. Ames and Sons.