Jan 18 Sunday  Has snowed quite hard all day.  The

Mrs Witherell staid at home because she looks so bad

read The Vale of Cedars by Grace Aguilar & have

written a letter to Pauline Dean.  Made a long

call in the other part of the house this evening.  Mrs

S Ames there with me

Feeling under par, Evelina and her daughter stayed home from church today while the men of the house pushed through the “fine cold dry snow”** to get to meeting. Sarah Witherell stayed home, too, still recovering from having had her teeth pulled.  It was a luxurious opportunity for Evelina – and Susie and Sarah, perhaps – to sit and read in relative quiet.

Evelina’s choice (which she probably read in serialized form in a periodical, as the tale wasn’t published in book form until 1853) was The Vale of Cedars or The Martyr’s Tale by Grace Aguilar. It was a tale of a Jewish father and daughter trying to hide from the Spanish Inquisition in 1479. The “Vale of Cedars” was their hideout. Eventually discovered and imprisoned, the daughter resisted the church’s demand that she convert to Catholicism.  Thus, the “Martyr’s Tale.”  The dramatic plot with its medieval overtones, exotic location, and anti-catholicism probably captivated Evelina, just as the author meant it to. Aguilar included these words from Byron’s [Oh! Weep for Me] in her introduction to the book:

“The wild dove hath her nest – the fox her cave –

Mankind their country – Israel but the grave.” 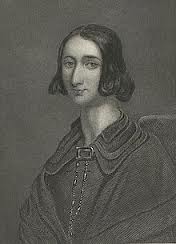 March 8th Sat.  This has been a very stormy day,  Windy & snowy.

Orinthia did not keep school and we have had

a nice quiet time.  I have finished putting the

some on a coarse shirt.  Orinthia finished a

coarse shirt that she has been making & commenced

another for one of the boys.  I have finished reading

Woman’s Friendship was a domestic novel by English author Grace Aguilar.  In her short life,  Aguilar wrote not only novels, but also poetry, histories, and  religious treatises that explored her Jewish heritage.  Among the latter, she translated “The Spirit of Judaism” from the French, and wrote her own extensive exploration of the scriptures, “The Jewish Faith: Its Spiritual Consolation, Moral Guidance and Immortal Hope.”  She was prolific and extremely bright.

Her domestic novels – the kind of writing that Old Oliver called “love trash” – were her most successful publications. Such novels were a literary genre, not unlike today’s “chick lit,” that was written for, and often by, women.  The novels usually had storylines that featured the travails of young heroines.  Woman’s Friendship, published posthumously, was the tale of one such young woman who suffers many misfortunes and reversals but manages to save her family after her father’s early death and her brother’s losing fight with consumption, all the while retaining the lifelong friendship of a countess. Putting the improbabilities of its plot aside, Evelina liked it. As she sewed today with Orinthia Foss, Evelina may even have had the story from the book in her head.  She certainly liked the book well enough to eventually commence another novel by Miss Aguilar.

It was Saturday, the day that Oakes Ames usually went into Boston.  Did he go today, or did the weather make traveling too difficult?   Were they all getting tired of winter?