but she has done the washing and went to

bed early in the evening  I did the housework

to day and was about all this forenoon  This

afternoon have been to Mr Nahum Williams

Friday night and is to be buried tomorrow at

ten Oclock.  We drive the new horse for the first.

The stalwart Jane McHanna, now the only house servant at the Ames’s, did the Monday washing today despite feeling not “at all well.” By evening she was in bed. Evelina picked up the slack and did the rest of the housework herself, something she was fully capable of doing.

Despite the extra choring that she did, Evelina and her sister-in-law, Sarah Lothrop Ames, found time to ride out of the village to call on Nahum and Amanda Williams.  Nahum, who lived in Furnace Village, was most likely the son of the Seth Williams who had just died. As was customary, the Ames wives helped tend the dead, the dying, and their families in their community.

A little more than twenty years later, on September 1, 1873, Nahum Williams himself died, and Sarah Lothrop Ames and her husband, Oliver Ames, Jr. along with her brother, George Van Ness Lothrop and his wife, Almira Strong Lothrop, would attend his funeral. Clearly, Nahum had a long-standing relationship with the Lothrop family, if not the Ameses, too. 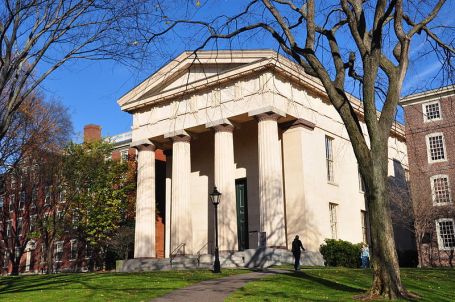 & Pauline for Roxbury in the stage.  Mr Ames &

Oliver via Mansfield to Providence.  Oliver is

delighted with the idea of going to school & I am

sure he will improve his time  It seems

very lonely to day I have taken the bedstead down from

the boys chamber to clean it swept the parlour & washed

Guests and family departed the Ames compound in North Easton today. Schoolteacher Orinthia Foss left to return to Maine, probably to Leeds where her parents and two younger siblings lived.  Houseguest Pauline Dean, left, too, taking the stage with Orinthia as far as Roxbury. Her final destination was unknown.  The most noteworthy departure, however, was that of 20-year-old Oliver Ames, middle son of Oakes and Evelina.  He was going to college.

Oakes Ames, after having resisted giving his son a college education, had evidently made a decision to let Oliver go. Father and son traveled together to Providence.  Perhaps Oakes helped his son find his living quarters, perhaps he explored the campus at Brown in an attempt to know it for himself, if he didn’t know it already. Sarah Lothrop Ames’s brother from Detroit, George Van Ness Lothrop, had once attended the school; Oakes and Oliver must have known that.

Established in 1764, Brown was the third oldest college in New England. Manning Hall, the neoclassical building shown in the photograph above, was the newest building on campus. No doubt it was a building that Oliver went into often, for it held both the library and the chapel. The president of the college at the time was Francis Wayland, a Baptist minister, who was stern but beloved and progressive.

As Evelina noted, Oliver was immensely pleased to be going to Brown, and she, in turn, seemed pleased for him. She was confident that he would study hard and do well.  Her pride didn’t protect her from feeling
“very lonely” today, though.  Choring was the only antidote she could imagine to liven up the quieter house.

us from church at night and Alson carried Orinthia

The boys went to Dr Swans & Augustus’ to call on

Miss Eddy who is stopping there  Oliver & wife & George

and family to Mr Lothrops & Pauline went into to stay

with Helen & talk about Warren

Socializing continued today after church, with Evelina welcoming her sister-in-law Henrietta Williams Gilmore and a mutual friend, Mrs Stevens, back to the house. She and the latter went to call on Col John Torrey while the Ames sons rode south to Dr. Caleb Swan’s to call on a Miss Eddy, who must have been special to warrant all three boys coming to visit.

Not forgetting that the Lothrop family had just been through the loss of Sarah Ames’s brother Clinton Lothrop, houseguest Pauline Dean called on young Helen Angier Ames, niece of the deceased.  Evelina was certain that Pauline only went to talk about a new love interest, however. Oliver Jr and Sarah Ames, meanwhile, went with another brother, George Van Ness Lothrop, and his wife Almira to call on their parents and their brother’s widow.

George Van Ness Lothrop, a North Easton son who had moved west a decade earlier, was, in 1851, serving his adopted state of Michigan as State Attorney General. Active in Democratic politics and a general counsel of the Michigan Central Railroad for nearly three decades, he ran unsuccessfully for U.S. Representative and U.S. Senate. He was a great supporter of Stephen Douglas, which would certainly have put him at odds with his brother-in-law, Oliver Jr., who was a Lincoln man. In 1885, he was appointed by Grover Cleveland to be U.S. Minister to Russia.

He died in 1897, and was honored with a road in his name in Grosse Pointe, Michigan, just outside of Detroit.

Monday Aug 18th  Jane washed this morning and had Ellen

to assist so I sat down quite early to sewing

cut out a chimise for Ellen to make

This afternoon went to Mr Whitwells to tea

Mr Ames was going to Bridgewater and I

rode there with him.  Called at Mr Harveys

to try to get some butter but she had none

to spare.  Hurried home expecting Pauline she did

The new servant, Ellen, helped Jane McHanna with the laundry today. Evelina stayed out of the way and concentrated on her sewing, setting work aside for Ellen to do later. She needed another chemise.

In the afternoon Evelina went to the Whitwells’ for tea.  She had just been there the day before during the intermission between church services. Today Oakes accompanied her and the two went on from there to Bridgewater.  Evelina was hoping to buy some butter from a Mr or Mrs Harvey, but had no luck. Evidently no longer producing butter herself, she’s had to travel this summer to find it. Oakes, meanwhile, was on his way to Bridgewater on shovel business – or Whig politics.

Not yet alluded to in Evelina’s diary is the illness of one of Sarah Lothrop Ames’s brothers, Dewitt Clinton Lothrop. Clinton, as he was known, was deathly ill with typhus fever. Another Lothrop brother, George Van Ness Lothrop and his wife, Almira Strong Lothrop, had come back to town from Detroit on Clinton’s account.