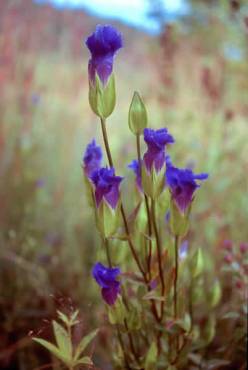 Oct 19th Tuesday  Have been sewing on Susans

and it appears to me that it will never

be finished  I get along so slowly on it

Ann has ironed the coloured clothes

“[P]ritty fair,”* today was. Evelina spent much of the day – more time than she wished, in fact – working on a dress for her daughter Susan. The material was delaine, a light wool that should have been easy to sew, but for some reason Evelina was going along “so slowly” that she just couldn’t see the end of it. Perhaps she wished she could be outdoors, instead. Her servant Catharine Murphy was also sewing, most likely on a project that Evelina would have assigned her to do. Evelina occasionally gave material to her girls to sew their own aprons or simple dresses with.

Another diarist, not far away, definitely preferred to be outdoors. In Concord, Henry David Thoreau went for a walk and found the very last flowers of the season:

“I see the dandelion blossoms in the path. The buds of the skunk-cabbage already show themselves in the meadow […] I found the fringed gentian now somewhat stale and touched by frost […] It may have been in bloom a month. It has been cut off by the mower, and apparently has put out in consequence a mass of short branches full of flowers. This may make it later. I doubt if I can find one naturally grown. At this hour the blossoms are tightly rolled and twisted, and I see that the bees have gnawed round holes in their sides to come at the nectar. They have found them, though I had not. “Full many a flower is born to blush unseen” by man. An hour ago I doubted if fringed gentians were in Concord now, but, having found these, they as it were surrender […] It is too remarkable a flower not to be sought out and admired each year, however rare. It is one of the errands of the walker, as well as of the bees, for it yields him a more celestial nectar still. It is a very singular and agreeable surprise to come upon this conspicuous and handsome and withal blue flower at this season, when flowers have passed out of our minds and memories; the latest of all to begin to bloom, unless it be the witch-hazel, when, excepting the latter, flowers are reduced to the small Spartan cohort, hardy, but the most part unobserved, which linger till the snow buries them, and those interesting reappearing flowers which, though fair and fresh and tender, hardly delude us with the prospect of a new spring, and which we pass by indifferent, as if they only bloomed to die. Vide Bryant’s verses on the Fringed Gentian. […] It is remarkable how tightly the gentians roll and twist up at night, as if that were their constant state. Probably those bees were working late that found it necessary to perforate the flower.”**

Much as Evelina enjoyed flowers, we might doubt that she would have been as eloquent about seeing the late-blooming gentian in the meadow as Thoreau.