lesson this forenoon and I sat with

Susan to see her take hers so that I

could assist her some if required

We have been to the funeral and

then Mrs S Ames and self went to the sewing

Susie Ames and Emily Witherell took another piano lesson this morning. Evelina, still determined that her reluctant daughter was going to learn to play the new instrument, “sat with Susan” in the parlor as she had her lesson. Miss Alger, the teacher, had tea with Sarah Witherell later in the day. The two women might have discussed how the girls were faring with their lessons; with Evelina out of the house, it would have been easier to discuss the fact that Emily was the stronger student.

Evelina and Oakes, presumably, and other Ameses attended the funeral of the Swain baby. John H. Swain Jr. had died on Sunday from “Teething,” much to his parents’ sorrow. Today, the sun was out, though the wind blew, as folks gathered around the little grave.

Afterwards, Evelina and her sister-in-law, Sarah Lothrop Ames, rode to the monthly Sewing Circle at the home of “Mr Clarke.”  He may have been Daniel Clark, a carpenter, whose wife was Elvira Clark and whose daughter, Elizabeth, had played the piano at the meeting house the summer before last. The piano again! Evelina couldn’t get away from other mothers whose daughters did well at the piano. How frustrated she must have felt about her own daughter. 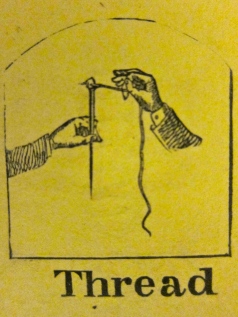 Wednesday May 7th  Orinthia went to Boston this morning

with Abby Torrey after she left I went into Olivers

on an errand and stopt a long while as I am

other part of the house to bid Mrs Stetson good

and Mrs Lincoln Drake rode up and saw me by

the window and I was obliged to see her, thus the day passed

and I accomplished very little Went with Mrs Witherell

to the sewing circle at Daniel Clarkes

The Sewing Circle held its monthly meeting today, this time at the home of Daniel and Elvira Clark.  Roughly contemporary in age to Oakes and Evelina, the Clarks were members of the Unitarian Church.  Daniel was a carpenter who occasionally did work for the Ames family. Elvira, like Evelina, was a housewife with teenaged children.  She and Evelina visited together last Sunday during the intermission between sermons.

So much socializing went on today that Evelina had to chastise herself – “I am sure to do what I ought not” – when she spent too much time next door visiting her sister-in-law, Sarah Lothrop Ames. Sarah must have been feeling better; although she didn’t go with Evelina and Sarah Witherell to the Sewing Circle, she had improved enough not only to have a good, long chat with Evelina, but also to have an outing to Bridgewater, which she was “carried to” by her nephew Frank Morton Ames.

Evelina stopped in at Sarah Witherell’s to say goodbye to Mrs. Stetson, a friend of the family who was departing for Bridgewater, too. She then was spotted by Caroline Torrey Drake, a friend who stopped in for a visit. Mrs. Drake, a woman in her early fifties, was the mother of eight children: five girls followed by three boys.  Her first child was born when she was 20, her last child when she was 45.  Now that’s childbearing!