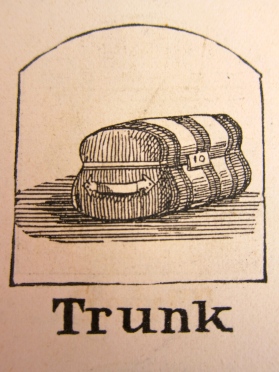 Aug 18th Wednesday. This day has been a busy one

Have fired Susan off to stay at Alsons and

with Orinthia while I am gone. Mrs Stevens

has gone to Alsons just after they left Mr

of my packing and I had to leave all but

have got all ready this evening

The push was on to finish preparations for the trip Evelina, Oakes Angier and others would be taking the next day. Ten-year-old Susie Ames was “fired off” to stay first with her Uncle Alson Gilmore and later with her teacher, Orinthia Foss. What did she think of all this? Her older brothers, Oliver (3) and Frank Morton, got to stay at home with their father. She may have wondered why she didn’t get to stay home, or she may have been excited to spend a few nights away.

While she was packing her trunk, Evelina was interrupted by the Jones family, but after they left “got all ready this evening.” The Joneses were a family from Foxboro; their purpose in visiting was presumably social, but their timing was awkward. Evelina wasn’t prepared to spend her time with company; she just wanted to get ready for departure. We should remember that not only did she have to pack for herself, she had to get Oakes Angier’s clothes ready, too. A sliver of consolation in all this was that she would have a reason to wear her new traveling dress, the one she worked so hard on earlier in the summer.

July 16th  Have been to Boston & Mt Auburn with

Mrs Witherell, S Ames & A L Ames had a

Auburn about one or two called on Mrs

Stevens and the rest of the day shopping

Did not see any of Mr Orrs family except

The Ames women went to town today. Apparently they headed first to Mt.  Auburn, probably to take a turn around the cemetery, then on to Boston. It sounds as if the four women rode in a carriage or wagon all the way from Easton. One of the women may have driven the vehicle, but it’s more likely that a man, such as Old Oliver’s coachman Michael Burns, drove. Whoever held the reins guided the horse along what is today’s Route 138.  The carriage would have traveled a short distance east to get out of Easton, then headed straight north through Canton and Milton into the outskirts of the big city. Normally the vehicle would have taken Washington Street as it veered northeast into Boston, but today they went instead via Jamaica Plain to cross the Charles River.

After their tour of Mt. Auburn Cemetery, a popular destination for many pedestrians and riders, the Ames women crossed back across the Charles River into Boston, where they spent “the rest of the day shopping.” Evelina purchased material and a pattern, perhaps, for a “travelling dress,” such as the one in the illustration. She will spend the next few weeks making this new outfit at home.

Back in Easton, meanwhile, Old Oliver reflected on the week going by and noted that “the 14 – 15 + 16th were all warm good hay days + verry drying.”** He was satisfied with the weather.

June 16th Wednesday  The hottest day we have had

Julia has been here again to day have

the waist to green gingham and now they are

to finish  when will they be done  Mother has

about nine or ten to sew for me

gentleman from New York to dine

The mercury rose to 96 degrees, and the women stayed inside out of the heat.  Even out of direct sunlight, however, the indoor air had to be stifling, so the women are to be admired for working with layers of fabric in their laps as they sewed. The ladies weren’t nearly as warm, however, as the men outside on the building lot, moving stones, or the men making shovels inside the factory. Everyone baked.

A new servant, Catherine Middleton, arrived to help with the sewing and, as she had been for the past few days, dressmaker Julia Mahoney was present to help Evelina. The women worked on several projects, including a “brilliant” dress for young Susie Ames. Brilliant was a pretty, shiny cloth, recognizable for its glazed and, often, patterned surface. It was a fabric that had been especially popular in the 18th century, but still had its admirers in the 19th.

Known by other names, including calamanco, the cloth originated in Norwich, England,  a center for textiles. Its origins make us wonder if the cloth Evelina was using had been made locally, in Lowell, Mass., say, or Rhode Island, or had been imported.

made a chimisette for it  Mother is not at all well

Oliver went with Mrs S Ames after Helen.  Got to

Dorchester about 5 Oclock and home about half past nine

The weather is hot and uncomfortable.  Fred returned

to night having passed a good examination

Fred Ames was accepted at Harvard!  He shared the good news with his relatives when he returned to North Easton this evening. He did well on his examination, which perhaps constituted some combination of interview and oral or written test of the depth of his knowledge. How proud his parents must have been, and what relief he must have felt to have the entrance hurdle behind him.

Fred’s life was now moving in a fresh direction but otherwise, things in North Easton were much the same as he had left them the day before. Under a hot and humid sky, Evelina was sewing and looking after her mother, Hannah Lothrop Gilmore, who wasn’t feeling well.  Fred’s parents, Oliver Jr. and Sarah Lothrop Ames, meanwhile, had driven off to fetch his sister, Helen, from school in Dorchester.

Today’s sewing project was a chemisette for Evelina’s newest dress, the silk muslin that she and dressmaker Julia Mahoney had been working on this week.  The chemisette was a light blouse designed to be worn under the jacket bodice of the dress.  Hers probably wasn’t as elaborate as the chemisette in the illustration.

April 8th Tuesday  Have been looking over some of Susans

clothes for summer mended & let the tucks down

to her skirts & finished the shirt for Mr Ames

that was cut out a week ago Monday.  Ironed

some collars cuffs &c.  This afternoon have had

a powerful rain  Jane has starched her fine

clothes and got them ready for Ironing and has

ironed some of the coarse clothes

Tucks are pleats. They were sewn into little girls’s dresses by design so that the dresses could be let out as the girls grew taller. Tucking was preferable to lengthening the hems because pleats required less fabric, were easier to put in and take out, and less obvious when changed.  The object of the whole exercise was to make the dresses last as long as possible.

Anyone who has read Little Women or seen the 1933 film version of Louisa May Alcott’s classic tale of the March family will probably recognize the image of Amy March (played here by Joan Bennett). In this scene Amy is being punished by her schoolteacher for bringing pickled limes to class. She is so mortified that she never returns to the school again. The only worse “deggerradation”  she can imagine would be having her clothes shortened by tucking: “Mother doesn’t take tucks in my dresses whenever I’m naughty, as Maria Parks’s mother does […] it’s really dreadful, for sometimes she is so bad her frock is up to her knees and she can’t come to school.”

Most young girls had tucks in their dresses, whether they were the fictional Amy March or the bona fide Susie Ames. And so today, as Evelina got Susie’s summer wardrobe in order, she “let the tucks down” to accommodate her daughter’s new height.  There’s no instance of her taking the tucks back up in order to punish Susie when she was naughty.

This image of Amy March also illustrates the aprons or shifts that little girls wore over their dresses to protect the outfits from soiling.