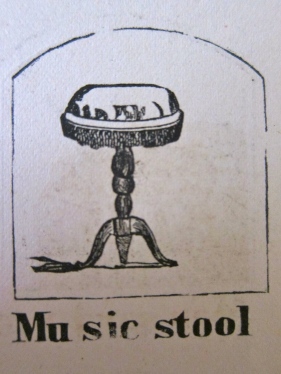 Sat Sept 25th Louisa has a swelling on the back of

her hand which troubles her & she left this

morning and I have got Catharine Middleton

to stay untill next Wednesday when I expect

a new girl  Catharine made some squash

pies and finished the ironing. It has been about

most all the week  Helen & I have been to N Bridgewater

She had a tooth extracted  I got a Piano stool

Evelina was still spending money. In North Bridgewater (today’s Brockton) she bought a music stool to go with the new piano that was coming soon to her parlor. With her was niece Helen Angier Ames; the fifteen-year-old had a less enjoyable errand to accomplish: getting a tooth pulled. It’s interesting that Helen’s aunt, Evelina, and not her mother, Sarah Lothrop Ames, accompanied the girl to the dentist.

In the servant department, the new girl, Louisa McAvoy, departed today, having not even worked a full week. Evelina was really struggling to keep a household staff together. Catherine Middleton agreed to stay on and was helpful with the baking and ironing, the latter of which had taken “most all the week” to complete. We might wonder if Evelina ever missed Jane McHanna, the one servant who had been steady, if occasionally ill – the one whom Evelina had fired in June. Evelina had yet to really settle on a dependable replacement. 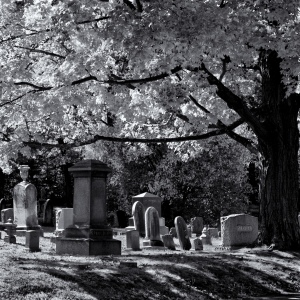 Helen & Susan went with me. Dined at Mr

Burrells, Orinthias boarding place  got there about

twelve left there about two & went to Dr Washburns

He filed my eyetooth to make it even with the

others  Went into the cemetery and in Orinthias school

a short time & home by Alsons stoped with Lavinia a

With her niece, Helen, and daughter, Susie, Evelina drove Mrs. Patterson to her home in Bridgewater. This was the last appearance of Mrs. Patterson in the diary, so we may assume that she didn’t work at the Ames residence any more this year. Most likely, she had been hired for spring-cleaning only, yet her brief tenure with the Ameses had a lasting impact. She was efficient enough to make Evelina dissatisfied or otherwise unhappy with the work of her regular servant, Jane McHanna, the result of which was the latter’s dismissal.

While in Bridgewater, Evelina accomplished various errands, the most pleasant of which was probably dinner at Orinthia’s “boarding place.”  The least pleasant had to be the appointment with Dr. Washburn, where the dentist filed down one of her canine teeth “to make it even with the others.”

Evelina went into the local cemetery, too, perhaps to visit a specific grave. Interesting to note that on this exact same day in the Boston area, another cemetery was receiving attention. In Roslindale, Mount Hope Cemetery – a new, rural-type graveyard in the mold of Mount Auburn – was dedicated.

On the way home, Evelina stopped at the family farm and had a quick chat with her niece Lavinia. 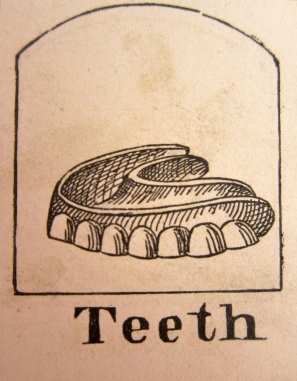 to Bridgewater this morning for Mrs Witherells temporary

Mrs S Ames came about half past eleven and spent

the rest of the day.  Have written a letter to Harriet

Ames [of] Burlington.  Went after mother in a sleigh to night

Sarah Ames Witherell traveled to Bridgewater today to pick up a “temporary set of teeth” to replace the real ones that had been pulled out earlier this month. It turned out that they weren’t ready, so she had to return home without them. As before, she was accompanied by several family members including her son George Oliver Witherell and two of her nephews, first cousins and good friends Oliver (3) and Frederick Lothrop Ames, who were still home on a recess from college.

Evelina, meanwhile, fed midday dinner to all the family members who stayed behind in Easton.  Sarah’s daughter, Emily, didn’t go with her mother this time; unlike Oliver and Fred, she and Susie Ames may well have been back in school. Evelina may have been feeling the strain of so much company.  She notes that her nephew Augustus and his wife, Hannah Lincoln Gilmore, had come to call “Three evenings this week.” Augustus, who did a lot of work for Oakes and Oliver Jr., often made himself at home at the Ames’s.

Harriet Ames of Burlington, Vermont, to whom Evelina wrote today, was a spinster cousin. Her mother was the widow of Old Oliver’s brother, John.*

*not the same John Ames who manufactured paper in Springfield 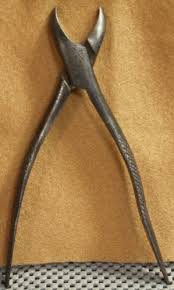 Jan 13 Tuesday  Have not done much work to day

can scarcely tell what I have been doing  Have

Have got out an apron and commenced a stocking

for her to knit.  This afternoon called on Mrs Richards

Augustus and wife at Olivers.  Mrs Witherell been to Dr Washburns

& had her teeth out.  Mrs S Ames George & Emily went with her.  Father

& Oliver dined here & the others when they came back from Bridgewater

This was not Sarah Witherell’s best week. Limping from a bad burn on her foot, she kept an appointment with a dentist, Dr. Nahum Washburn, to have her teeth pulled. Dr. Washburn had his office in Bridgewater, in an historic building known as “the Tory House.”  It was the same office that Evelina had been to several months earlier to have her own teeth worked on.

Modern historian Jack Larkin has noted that “[h]undreds of thousands of Americans had at least some of their teeth badly rotted, a source of chronic pain and foul breath to many, with extraction its only cure […] Dentistry, which most rural American physicians practiced, was by far the most effective form of surgery; extraction was a decisive and relatively safe procedure (although infection always posed some risk).”*

While Sarah Witherell suffered today, her family united to support her. Her children and sister-in-law accompanied her to the dentist’s office.  Evelina (with Jane McHanna in the kitchen, of course) fed the entire family, which made for twelve around the dining table. Old Oliver, whose midday meal was usually prepared by Sarah Witherell, came over from the other part of the house. The Ameses from next door were there, too. Everyone came together for Sarah Witherell.

Evelina managed to socialize today, too.  She called on various friends and relatives around town, perhaps sharing the news of poor Sarah’s painful dentistry. 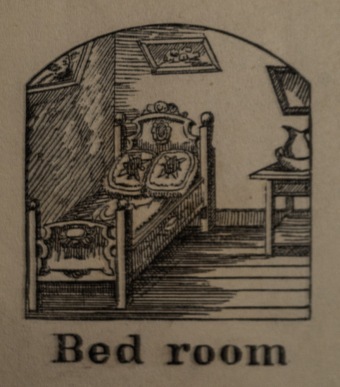 sick and did not go into Mr Holmes very early

Went about ten Oclock and made her bed and

fixed her hair  Went in evening and found

has had her parlour painted a[nd] papered she

is very much dissatisfied with the way the paper

is put on and talks of having it scraped off

The aftereffects of the dental care that Evelina received yesterday from Dr. Washburn made for a slow and unpleasant start to her day.  By mid-morning, however, she was out and about. She went to the neighbor’s to check on the ailing Harriet Holmes.  She went back at night, too, and found her sister-in-law Sarah Witherell in attendance.  Both women took time to arrange Harriet’s bed linens, perhaps removing them for cleaning.

Sarah Witherell had done some painting and papering in her parlor with which she was unhappy.  She would have had to get permission and funding from her father, Old Oliver, for the project.  We see from this that Old Oliver was capable of spending money for decoration, perhaps especially if his daughter requested it. How he took the news that the decorating would have to be redone isn’t recorded, however!

Evelina was so preoccupied today that she may not have noticed that the haying was finally over.  Old Oliver announced yesterday that it had been“a midling good hay day. […] we got in the last of our hay to day – we have had bad weather for haying this year + have bin a long time about it” 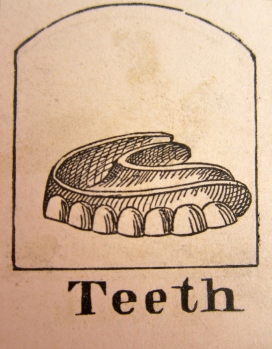 Aug 7th Thursday  Have been to Bridgewater to day

to have my teeth fixed  Dr Washburn kept me there

untill past twelve and then said he should have to heat

up the teeth which take an hour and half.

Left them with him and went to Mr Harris’ and

returned at night for them.  Oliver was with me

Harriet had gone to Marshfield

It says a great deal about 19th century dentistry that the illustration above, made for a spelling book, used an image of dentures to depict the word “teeth.”  In 1851, false teeth were the norm for most adults. Dental hygiene was primitive and regular care by professionals unavailable. Although brushes for teeth were around, toothpaste didn’t come in until the 20th century.  Those who could afford to pay a dentist usually ended up with false teeth. So it was for Evelina, who had dentures, or at least several false teeth that she had to leave at the dentist’s today to be fixed. Her son, Oliver (3) accompanied her.

Nahum Washburn was the Ames family’s dentist.  A graduate of Dartmouth College, he was trained in homeopathy but preferred dentistry.  He had an office in Bridgewater from 1840 to 1883.

Washburn cared about the pain that his patients had to go through and developed a machine to reduce their discomfort when he worked on their mouths.  In 1859, he obtained a patent for a

“DENTAL APPARATUS FOR RELIEF OF PAIN WHILE OPERATING”

a contraption that was “a combination of dental forceps…with [an] electro-magnetic mechanism…so that the electrical current or currents [could] be made to flow through the nerve or nerves of the tooth, or the jaw or flesh immediately contiguous…in order to benumb the same and render such more or less insensible to pain during the performance of the dental operations. ” *

Doesn’t sound all that painless. 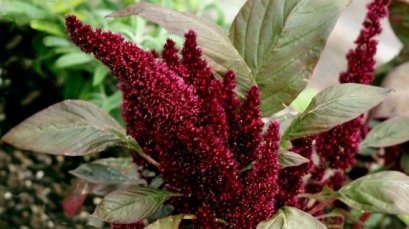 Wednesday May 28  Another busy day about house and what have

my time  I have lengthened the valance for the

and Mrs S Ames have been to Dr Washburns to

have something done to their teeth.  Mrs Ames had

a new one put in  I have planted some Asters

Either Evelina was getting absent-minded or her work load was so varied today that she just couldn’t keep track of all that she did. “What did I do all day?” she wondered when she sat down in the evening (or the next morning, perhaps) to record the day’s events in her diary.

For one thing, she worked on the textile that was to go with the new bedstead, a task that had to have been more pleasant than what her sisters-in-law, the two Sarahs, faced. They went to see a dentist, Dr. Nahum Washburn in Bridgewater. Dentistry in the nineteenth century was primitive compared to what it is today, and often involved extraction as a solution to toothache. A visit to the dentist was nothing to look forward to. Sarah Ames came home with a new tooth tucked somewhere in her mouth.

Working in her flower garden, of course, was another way Evelina spent her time. Today’s new plants included asters, alyssum, and prince’s feathers, a trio of choices that offered different texture and size.  Was she putting in seeds or seedlings?