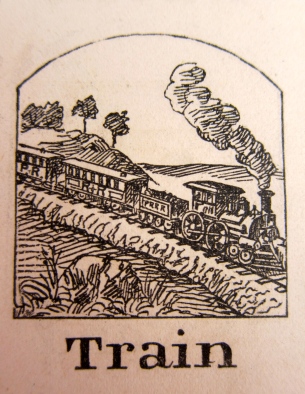 and all dined at Mr Orrs  Was undecided

whether to go with them to New York untill it

was nearly time for the cars to start but feared

if I did not go that I might reflect on it

to the cars  O A Ames & self called at Mrs Dorrs

just before we started.  Bought some crockery

Old Oliver recorded the momentous departure of his oldest grandson: “[T]his was a fair day wind north west, midling cold  Oakes Angier Started for Cuba to day and his Father went to New York with him”*  Oakes Angier was ill and had been advised to seek a more healthful climate in Cuba. After a week of preparation, he and both his parents headed into Boston to catch the train for New York, where Oakes Angier would board a ship bound for the West Indies.

Initially hesitant, Evelina had been afraid to commit to traveling to New York with her husband and son. But the real possibility of never seeing Oakes Angier again impelled Evelina to board “the cars” and go – a huge step for the small town soul. She managed a bit of shopping in Boston before boarding; the familiarity and ease of that activity may have helped allay her agitation about traveling.

The train that the family took would likely have been the early Hartford and New Haven Railroad, which connected to a train in Springfield or a steamship in southern Connecticut.** Caleb and Melinda Norris (she of the brand new dressing case) went with them to the station. Evelina and her family must have felt reassured to wave goodbye to caring friends. Everyone was hoping for the very best for Oakes Angier.

** Ed. note: The development of railroad and steamship lines was rapid and ever-changing during this period; ownerships and lines merged and competed constantly. It’s difficult to pin down the exact route that the Ameses would have traveled between Boston and New York. Railroad buffs, please weigh in.

have been to Boston and Oakes A came

home with them  Mrs Norris has a present

from Mr Norris of a beautiful dressing case

Have got the forks & spoons &c from Bigelows

for which they charge 77 dollars 77 cts

and I went [to] Augustus after Mother this forenoon

Evelina seemed to be in better spirits, perhaps because Oakes Angier returned from Boston. She was savoring every minute with him before he left for Cuba.

Her sisters-in-law, Sarah Ames Witherell and Sarah Lothrop Ames, had also been in the city. They returned with the news that Caleb Norris, son-in-law of Robert and Melinda Orr, had given his wife, also named Melinda, a dressing case for her 28th birthday. Norris was a dry goods merchant and the young couple lived with her parents on Columbus Avenue. Given Norris’s connections in wholesale and retail, he must have been able to procure his wife a fine box, perhaps at a friendly price. However he managed it, he impressed the Ames women mightily.

A dressing case was a fashionable item for women**, one that could be placed on a dressing table or clasped closed to travel. Most cases, such as the one in the illustration, contained bottles and vials to hold perfume and lotion, and brushes and combs for the grooming of increasingly complicated hairstyles. All items deemed necessary for the beautification and maintenance of a woman’s hair, face and hands were thoughtfully and expensively included, topped off in this case with silver lids.

Their friends weren’t the only ones spending money on luxury items. Evelina tells us what it cost to buy some new flatware and have it monogrammed: $77.77. In today’s dollars (2015), that would amount to approximately $2,430. The Ameses were becoming quite wealthy to be able to spend that amount. The purchase certainly overpowers that 75 cent crumb brush that Evelina received from her nephew Fred, but to her credit she seemed equally pleased with both acquisitions.

** There were also dressing cases for men, with different contents, naturally.

Tuesday Sept 28th  Have two girls and yet Im

about house a great deal of my time

I fear I do not manage right  To day

I have sewed but very little have been

preparing for the sewing circle and have

cut out 6 prs of pillow cases & put them

out to whiten and 5 sheets.  This evening

have written to Mr Norris about our piannos

Evelina struggled to manage the servant girls. Was it her fault or theirs? Was Evelina too lenient, or demanding, or unappreciative? Were the young women ill trained, or naturally inept, or uncertain about their responsibilities? Evelina was inclined to blame herself.

She needed their help today, too, as she was getting ready to host this month’s meeting of the Unitarian Sewing Circle. Evelina hadn’t held a meeting of the Circle at her house for nineteen months, since her unsuccessful attempt back on February 12, 1851. On that occasion, bad weather and disinclination or indifference on the part of other Circle members had resulted in a no show of anyone except the immediate family. She had given a party that no one came to. She had been mortified, but soon recovered.

Did the memory of that embarrassment surface today as she was cleaned house, prepared food, and cut out pillow cases to be sewn? She doesn’t say. She had moved on, perhaps, and was more interested in thinking about the new pianos to come than revisiting an old grievance.

But would her fellow needlewomen show up tomorrow?

July 14 Monday  Mr Norris left in the stage this

Bridgewater.  Jane has not done her washing as she

usually does but we have put the house in order

Scoured all the knives &c &c.  Have passed most

of the afternoon in the other part of the house

the whole family took tea there

The Harrises and Norrises left this morning, releasing Evelina from her hostessing obligations. The house was in disarray; probably, one of the couples slept in a bed in the parlour, the other stayed who-knows-where.  Furniture had to be put back, linens stripped and so on.  Jane McHanna had so much to do in the aftermath of the houseguests that she couldn’t do the Monday washing.  That was unheard of.

Jane and Evelina picked up in the kitchen, too.  One of them scoured the knives. In 1851, knives were made of mild steel, typically high in iron. Stainless steel, which has an alloy of low iron and high chromium, had not yet been developed, and wouldn’t appear until the turn of the 20th century. Knives in the 19th century corroded easily and needed to be cleaned periodically, often by being rubbed with fine sand.  Evelina or Jane might have sharpened them, too.

In the afternoon, Evelina and her whole family had tea at her father-in-law’s, served by her sister-in-law Sarah Witherell.  After a weekend of catering to houseguests, being served tea must have been a pleasure.

July 12 Saturday  Have been very much engaged to day

in putting my house in order & have been to work

on the cushion to the lounge, and put the cover

on to the arm.  called in Olivers awhile.  Mrs

H Ames and Mrs Mitchell spent the day there

Mr Norris came in the stage to night & Mr & Mrs

Company! From Boston by way of Bridgewater came the Orr daughters and their husbands. Melinda Orr Norris with her husband Caleb, who had visited Easton just the other day, and Julianne Orr Harris and her husband, Benjamin Winslow Harris, arrived for an overnight stay with the Ameses.  Evelina spent much of the day “very much engaged” in getting the house ready for the two young couples, although she did manage to slip next door to sit with her sisters-in-law. The whole Ames property was full to the rafters.

Everyone had tasks to do today, which wasn’t unusual in that hard-working family. Old Oliver and a crew were outdoors:

“it was cloudy half the fore noon but the afternoon was pritty fair wind north part of the time + south west a part we mowd the high land back of the Factory pond and that on this side of the old pair trees. to day”  Was this mowing a forerunner of haying season?