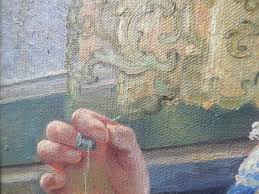 Wednesday Dec 8th  Have been doing to day probably

what I shall while Oakes A stays, to work

on his clothes  He went to Boston this

morning  It is so near the time he is to leave

that I do not like to have him away but

how little is he sensible to what my feelings are

Miss Alger has given the 15th leson

Only one week earlier, Evelina had learned that Oakes Angier’s illness had returned. She had been shocked, rattled, anxious. Today, a week later, she was not much improved and had added a dose of self-pity. She was feeling sorry for herself. While Oakes Angier went off to Boston for the day, probably with his cousin Alson Augustus Gilmore, Evelina stayed at home to mend and sew the clothes he would need for the journey to Cuba. “[H]ow little is he sensible” to her maternal concern and regard, she bemoaned.

Oakes Angier may have been quite aware of his mother’s feelings, and may have wanted a break from them. Fresh air, sunshine and a jaunt into Boston must have appealed to him. He had his own mental adjustments to make to this threat to his young life, independent of everyone else’s personal regard. He had so much at stake.

So mother and son spent some time apart, he exploring some of the larger world he would soon be thrust into, she nursing a heavy heart at home, sewing, of course, perhaps with piano scales running in the background.

The only thing that Old Oliver noted was that it was a “fair good”* day.