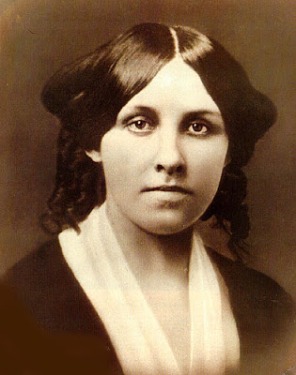 and sitting room chamber & I have been

For Evelina, this was a productive day. Her servants, Ann Shinkwin and Catharine Murphy, cleaned the shed and the sitting room, while she herself reorganized “draws & closets”. She must have felt quite satisfied having put two key rooms in order. Come evening, she and her husband went next door to tea where they visited not only with the Oliver Ameses, but also with Ann and John Swain and Ann’s mother, Sarah Bliss Meader. Mrs. Meader was from Nantucket; she must have been visiting in the wake of the death of little John Swain.

For Louisa May Alcott, a 19th century author who should need no introduction, this was an important day. Some literary sources have it that Miss Alcott, using the name “Flora Fairfield,” published her first story, The Rival Painters: A Story of Rome, on this exact date, when the author was barely twenty years old. However, closer examination suggests that The Rival Painters first appeared back on May 8 in The Olive Branch, a periodical published in Boston from 1836 through 1857.  A second story, easily confused with the first, was The Rival Prima Donnas, which was published on this date in 1854 in The Saturday Evening Gazette, earning the author five dollars.

Regardless of the scholastic disagreement over the first appearance in print of Louisa May Alcott, we can imagine that Evelina was exposed to her writing at various times from this year onward. Surely Evelina read other short stories and novels by this increasingly famous author. If she developed an affection for the author’s work, Evelina would have read Little Women, Little Men, and Jo’s Boys and been as familiar with the triumphs and travails of the March family as devoted readers still are 160 years later.