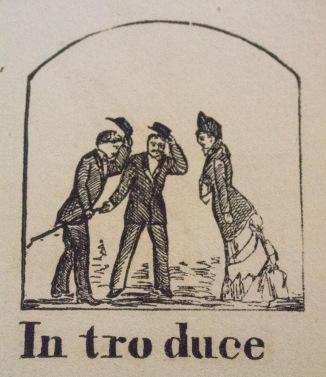 to day and I was fussing about house all

the forenoon  How is it that I do not accom

plish more? I try but somehow I get but

the sleeves to my borage dress.  It is going

to be something of a job to finish my dress

yet   Uncle Ephraim called to see about Mrs Ames again

After a string of warm days, this start to a new week “was fair rather cool.”*  While the servants did the laundry, Evelina was “fussing about house.” She also fussed at herself for not getting things done. “I try” she writes in frustration, feeling that she failed to meet her own standards. Her response to this perception was typical: she picked up her sewing needle and went to work.

Who was this Uncle Ephraim who called? There were at least two men in the Bridgewater area at this time named Ephraim Ames, and none named Ephraim Gilmore or Ephraim Lothrop. It appears that a distant Ames relative may have been the man who kept calling “to see about Mrs Ames again.” The Mrs. Ames in question was most likely the visiting Almira Ames, widow of cousin George Ames. Had she sparked a romantic interest in this eager caller?