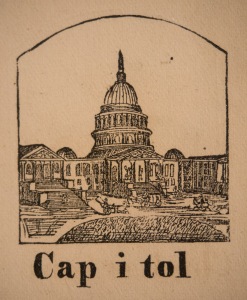 Thursday July 1st  Transplanted some in the garden

this morning but there came up a shower

and put a stop to it  I then went to

mending on some of Susans clothes  Susan

was quite sick last night and not well

enough to go to school to day.  This afternoon

In Washington, D. C., Senator Henry Clay of Kentucky became the first person ever to lie in state in the Capitol rotunda.  A giant in his day, he had served in the House of Representatives, the Senate, and as Secretary of State. He was the man who had created the Whig Party and aspired to the presidency, who always spoke passionately for the Union and was willing to compromise to preserve it. As he himself noted in a speech in 1844, “It has been my invariable role to do all for the Union. If any man wants the key of my heart, let him take the key of the Union, and that is the key to my heart…”* He had dedicated his life to public service and the country thanked him.

The next such person to lie in state in the rotunda would be Abraham Lincoln.

Less august (but no less meaningful to Evelina) events transpired in North Easton today. Evelina, Almira Ames, Sarah Ames and Sarah Witherell “rode to make calls.” This activity marks the first time that Sarah Witherell had ventured out socially since the death of her son, George, six weeks earlier.

Old Oliver made note of the rain that had interrupted Evelina’s early morning work in the garden: “It raind a little last night + there was a little rain this forenoon it was a warm day + cloudy most of the time.”**