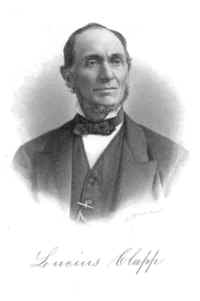 and self spent at Mr Whitwells  After meeting

Mr Ames Susan & I rode to Mr Clapps made

quite a long call  he has but a very few

Have engaged a trellis of him

The last formal recognition of the death of fourteen year old George Witherell took place in the Unitarian church this Sunday when the minister “preached a funeral sermon.”  Different from the ritual text that probably defined the graveside service just three days earlier, the sermon was presumably a collection of thoughts about death in general and the death of the young man in particular.  Reverend Whitwell knew the family well and, being an articulate and thoughtful wordsmith, must have offered the family some personal comfort and consolation.

Evelina appeared to be recovering her strength. With her husband and daughter, she rode to Stoughton after church to visit Lucius Clapp, where they made “quite a long call.” Evelina discussed flowers and a trellis. Was this trellis ordered in place of the one at the front door that was being built only ten days earlier?  Or was this a new trellis entirely, designed perhaps for the garden?  Was this the year of the trellis?

One imagines that Oakes Ames offered less direction about the trellis than his wife.  What he might have preferred to discuss with Lucius Clapp was their shared interest in the Whig party, or their mutual respect for temperance.  According to one nineteenth century historian, Mr. Clapp was a “kind-hearted”* man with a “modest and retiring nature.”* His politics were informed and liberal:

“Formerly a Whig, Mr. Clapp has been identified with the most progressive political creeds. He was one of the original Free Soilers, and chairman of the first Free-Soil meeting held in Stoughton. Since its organization he has supported the Republican party. He has been [a] member of school committees several years, and selectman of Stoughton seven years, and now (1883) holds that position. He has always been pronounced in advocacy of temperance, and has been connected with every movement for the betterment and advancement of his native town. He is an attendant and supporter of the Methodist Episcopal Church.”*

Mr. Clapp and Mr. Ames would have had much to talk over.