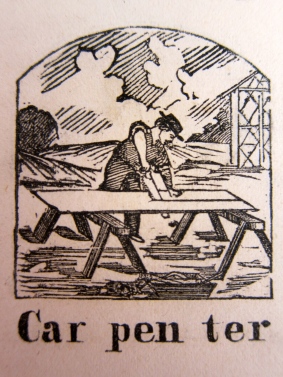 sister Amelia here this afternoon  Have got

the carpet down in the front entry and

the chamber carpet partly down

S Ames sent for the entry lamp for fear

I suppose that I should keep it but

Carpenters have come to rebuild the shops

A new week signaled a fresh start. It had only been six days since the fire at the shovel factory, but the clean-up had gone quickly. The ruins were “dismal,” as Evelina noted yesterday, but the debris was mostly gone, hacked down, shoveled up and carted away. Carpenters had arrived to begin rebuilding, as Old Oliver, too, noted in his diary:  “some of the carpenters came on to day to build up our shops + Mr Phillips + his son came.”*

Life in the village was returning to normal.  Housewives, some with servants, tended to washing day. Children went to school and men went to town meeting.  As at church, the fire must have been part of the conversation as the men gathered to decide on town affairs and expenditures for the coming year. People must have wondered how soon the shovel shop would be up and running.

At the meeting, a new moderator, Alson Augustus Gilmore, presided. Not yet thirty years old, it was his first time holding the gavel; he would repeat the performance twenty-four times over the coming decades.  According to William Chaffin, Gilmore and his predecessor, Elijah Howard, Jr., “served with signal ability.”**

Evelina and her sister-in-law, Sarah Lothrop Ames, had a minor set-to over “the entry lamp,” which appears to have been a luminary that was shared by both houses. Sarah was evidently skittish about not having it, and Evelina was annoyed to have it commanded away.  No cause for alarm, she might have said. She wouldn’t have been annoyed for long, however, as a favorite family member, Amelia Gilmore, arrived for a visit. Amelia was the young widow of Evelina’s younger brother, Joshua Gilmore, Jr. She had lately been working as a private nurse.