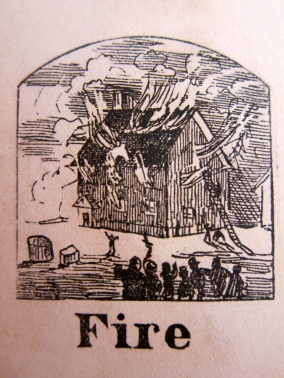 were burned to the ground by Quinns letting

his lantern fall into the varnish  Oakes came

home from the fire about 4 Oclock much

more cheerful than I expected to see him and

went to bed  OA and Frank came home to put

on dry clothes & went back and staid untill morning

Fire! Most of the shovel company’s buildings, situated in”the most centralized areas of Ames production, ‘the island’ at the outfall of Shovel Shop Pond,”* caught fire and burned to the ground. On his nightly round, Patric Quinn, the watchman, dropped his lantern into the varnish. The subsequent explosion must have been quick and, given the nature of the combustibles, uncontainable from the outset.

Naturally, Old Oliver recorded the event as well: “last night about eleven O clock the finishing shop took fire and the shops adjoining it were burned down – Bisbes shop and the small one made out of the cole hous that was mooved from the hoe shop was saved – the fire took from the varnish …”**

This latest conflagration was different. As modern historian Gregory Galer points out, “luck was not on their side…[the used fire] engine was no match for the blaze, fueled in part by 12,000 well-dried, ash shovel handles; oil and varnish used to protect completed shovels; and the wooden building itself.”*  The shovel shop was in ruins.

Evelina didn’t attend the fire, but she would have been able to see the flames from their front windows. The fire went on all night, her husband, sons and other townspeople present for most of it. There is no record of any injuries.