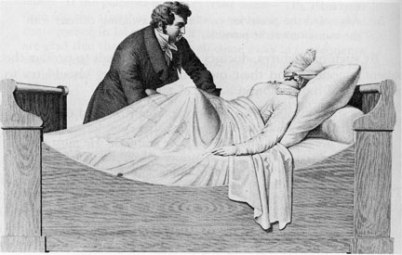 that time with Mrs Harris who was confined with

a daughter born about two Oclock.  looked at engraving

home to night but I did not get through with my

shopping and concluded to stop another night

Mr Harris came in the cars this afternoon heard of her

While shopping for art in Boston with her son Oliver (3), Evelina had another memorable day. Per usual, she stayed with the Robert Orr family in the city. While there, one of the Orr daughters, Julianne Orr Harris, went into labor and gave birth to a girl.  Evelina stayed with Julianne for a time, which would have been normal in the older tradition of a “circle of women” being present at childbirth. Evelina’s timetable is a bit confusing, but it sounds as though she was there for much of the labor – or “sickness” –  if not at the actual delivery.

It’s likely that a male doctor presided at the birth, because by this period, especially in urban areas, physician-assisted births had become the rule rather than the exception. Midwives were phased out, although they never entirely disappeared. One result of this change was that strict propriety in the birthing room prevailed over medical accuracy, at least in the 19th century. Modern historian Jack Larkin notes:

“Embarrassment and constraint became part of the birth process; physicians were greatly hindered, as midwives had never been, by firmly established canons of female modesty. Men could not look directly at their patients’ genitals, but had to examine them only by touch while they remained fully clothed.Often deeply uncomfortable with a bedchamber full of women looking on – sometimes critically – doctors tried to persuade expectant mothers to clear them out of the birthing room.”

Julianne’s husband, Benjamin Winslow Harris, was away when his wife went into labor, but got a message, somehow, and just made the train home. He would not have participated in the birth itself, but he may have had a hand in the naming of his first child: Mary Harris, after his own mother.