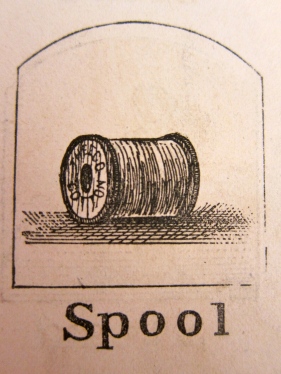 Feb 8th  Sunday,  Have been to meeting to day and at

others  had a pleasant call   Augustus called this evening

and staid untill quite late and I have

not read but very little to day  Mr Ames

came in about eight but too late to go out as

It was an ordinary winter Sunday for the Ames family. They went to church and visited with friends during the intermission between the morning and afternoon services. Back home, Evelina’s nephew Augustus came to call and seems to have overstayed his welcome; Evelina barely got to read. She probably sat looking at the new spools of cotton thread that Oakes had brought her the day before and wished that she could at least do some sewing. But sewing and other work was forbidden on the Sabbath.

The laws that the Puritans had established in the 17th century that forbid work or play on the Sabbath still held sway in Massachusetts in 1850. Businesses weren’t open, mail wasn’t delivered, and many people wouldn’t travel. People in Evelina’s generation had been taught to put down their daily work – except for chores which were essential, such as milking the cows – and spend Sundays quietly, at church and at home in contemplation and worship. No sewing, no housework, no shovel-making was permissible.

As the tempo of 19th century life picked up, however, that restrictive pattern was changing. Rail travel, for instance, was impossible to harness to a Puritan timetable. Many of the old ways were beginning to break down, and the advent of the Civil War would effectively demolish most of the lingering vestiges of Puritanism. The “blue laws,” however (so named by Connecticut preacher Samuel Peters) would continue to influence state laws, especially around commerce.  For much of the 20th century, retail stores could not open on Sundays, and in many places, alcohol couldn’t be sold.  Even today, in 2015, several states – Maine and Colorado, for two – forbid car dealerships to operate on Sundays.