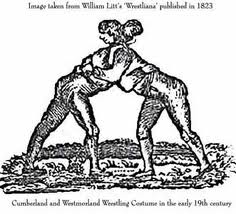 Sunday  A very stormy day of snow & not one

of the family have been to meeting and Mother could

not go home as she intended.  Have written a letter to

Louisa J Mower and have been reading  Went into the

office awhile to sit with Mr Ames  The boys came

near tearing the house down while I was gone.  Fred

Oliver (3) and his cousin, Fred Ames, ganged up on Oliver’s older brother, Oakes Angier, while their parents were next door at the office. In a fight over fruit cake, the three young men yelled and pummeled and wrestled. Evelina came home to the disarray and certainly reprimanded them all.  The twenty-something brothers were lucky that their mother, not their father, was the parent who returned first. Oakes Ames was known to mete out severe physical punishment.

Wrestling was a popular sport in the 19th century, one that the Ames men were expert at, according to tales that have come down through the family. The legend is writ large. Winthrop Ames describes it best:

“In Oliver’s time wrestling was as popular a sport as baseball or football is today,” he wrote in 1937, ” It was not considered beneath the dignity of anyone to engage in it, and local champions were […] highly esteemed[…]  Oliver senior was the acknowledged champion of the neighborhood, and though often challenged by contestants who sometimes came long distances to meet him, was never defeated […]

“He was not only immensely strong – he once knocked down a horse that bit him with a single blow, and lifted a wrestling opponent much heavier than himself clear of the ground and tossed him across the ring in protest against some unfair trick – but he was also agile and expert in all the technical grips, holds and falls of the sport.  He taught his sons to wrestle scientifically; and Horatio, the mighty of bulk, and Oliver junior became so proficient that they succeeded him as town champions […]

“[T]he old gentleman once said to one of them (according to some this was Horatio, to others Oliver junior) ‘Son, neither you nor I have ever been beaten.  Old as I am I may still be the better man.  Let’s have it out.’ So, forbidding anyone to follow them, father and son went to a secluded clearing in the woods and had a private bout. But neither would ever tell which was the victor.”*

Wrestling was clearly an outlet for the Ames men. Other than today’s rough-housing by the young men, it was a quiet Sunday at the Ames compound. Evelina wrote a letter and read.  No one went to church, the weather being too stormy even to carry old Mrs. Gilmore back to the farm.  Small wonder that the young men displayed a little cabin fever.