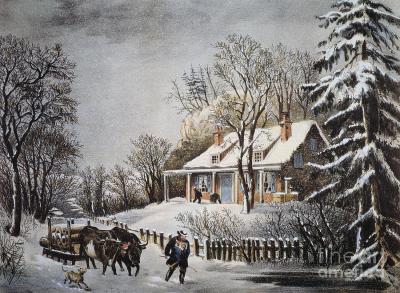 & wool Delaine  I have not sewed much with her

was choring about the house most all the forenoon

painted over some boxes for Mr Scott to grain.  made

the skirt & cuffs to Susans dress then went to knitting

on my hood which I commenced last evening.  Julia

cut and made and gathered the skirt and basted

it on to the waist, the sleeves are not made

Old Oliver’s wintry weather report for this day suggests a scene worthy of Currier & Ives:”[T]his was a cloudy day + a verry little fine snow. wind north west it cleard of[f] about sunsett. what snow fell to day + last night was 1 ½ inch.” The countryside was covered with snow, appropriate enough for the first full day of winter.  And winter was a season much illustrated by the 19th century printmakers, Nathaniel Currier and James Ives.  Working out of New York, the firm produced enormously popular hand-colored lithographs of mostly American scenes. Currier began the prints in 1835 and was joined by Ives, who had been the firm’s bookkeeper, in 1856. The men soon developed a stable of artists and produced prints through the rest of the 19th century and into the early 20th. Evelina would have been familiar with Currier & Ives images, in the same way that many mid-20th century Americans were familiar with the illustrations of Norman Rockwell. The images were everywhere.

Many, if not most, Currier & Ives prints were scenes of the outdoors. On this day at the Ames’s, however, the action was all indoors, as the women chored, painted, sewed and knitted. Dressmaker Julia Mahoney was at the house to sew a wool dress for nine-year-old Susan Ames. That a child Susie’s age was having a dress made by a “professional” rather than her own mother was certainly a sign of the Ames’s wealth. Helen Ames, Susie’s fifteen-year-old cousin next door, often had her dresses made by Julia. Evelina was keeping up with her sister-in-law, Sarah Lothrop Ames, in providing the best for her daughter.