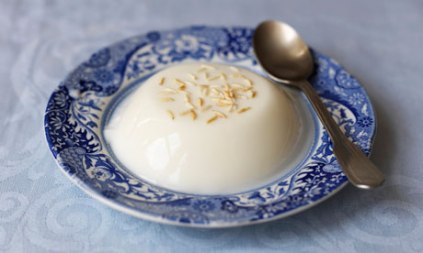 well enough for me to go to meeting  Oliver is sick

with the rheumatism there was no one to meeting

from there  All the rest went.  I spent the forenoon

a letter to Brother John & wife.  About 8 Oclock went

into the office with Mr Ames   Mr Swains brother came

A “pritty cold,” quiet Sunday, which Evelina spent productively. She missed church; her cold was better, but her cough wasn’t.  Next door, her brother-in-law Oliver Ames, Jr., was ill with rheumatism.

Evelina had some milk or cream on hand that she needed to use up, so she made not one but two dairy desserts: Ice cream, which seems ill-calculated to please on such a cold day, and blancmange, which was also served chilled.  Blancmange is a traditional, simple dessert made with milk, flour and sugar, poured into a mold to set. Sometimes used medicinally for sore throats, it was a popular treat in the 19th century.

Once the desserts were put away in the coldest area of the house (the shed? the buttery?), Evelina went to her desk and wrote a letter to her oldest brother, John Gilmore, and his wife, Eliza.  She hadn’t seen them since their brief visit back in June.

In the evening, Evelina walked across the yard to the office, where her husband and his brother usually met in the evening to go over the day’s business. On this occasion, however, with Oliver, Jr., under the weather, Oakes Ames was likely there by himself. Husband and wife sat together in rare, private companionship before being joined by an acquaintance.