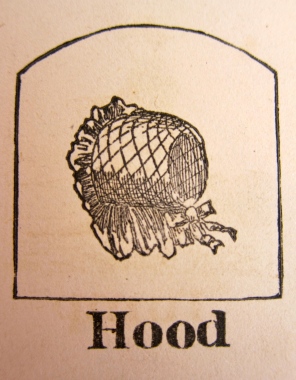 Monday Dec 15  The girls have both been washing to

out  Jane has sewed this afternoon the bags for the

sausages  I knit on Susans hood this morning

and this afternoon commenced knitting on a little

hood for the fair  Mrs Witherell & Ames have been

in awhile and are to work for it

While her servants Jane and Mary struggled with the Monday laundry, Evelina began to knit. Her nephew, Augustus Gilmore, had fetched some yarn – or worsted, as she called it – for her on Saturday while in Boston, and she was finally able to get to it today.

Evelina “knit on” two hoods, one for her daughter Susan and another for a church fair that was coming up. A hood might take a few different shapes, from a fitted piece that covered the top, sides and back of one’s head to one that covered the top and sides only, as in the period illustration above. The one above – which isn’t knitted, but sewn – is really just a variation of a bonnet.

Jane McHanna, too, worked with a needle today once the washing was done. She sewed some cloth bags for the pounds and pounds of sausage that had been produced on Saturday.  Sausage was usually forced into casings made from pig intestines, and this may have been the case with the pork that Evelina and Sarah Witherell produced.  But it may be that an additional cloth covering was desirable for storage or identification.  Hard to know.  Any thoughts from readers who have made their own sausages?