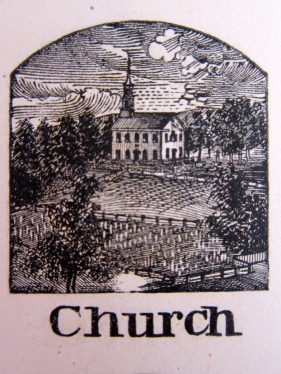 Nov 30th Sunday  We have all been to church except

Susan. She did not get ready in season

at noon.  Mrs Whitwell insisted on our taking a

with us from church  Augustus & wife have passed

Punctuality is a trait much prized by the Ames family; as it is in 2014, so it was in 1851. Evelina liked to be on time. She was probably familiar with the proverb that “People count the faults of those who keep them waiting.”

Susan Eveline Ames, nine-years-old, was often tardy.  In particular, Susie wasn’t fond of going to meeting, something her mother tried vainly to cure her of.  On this Sunday in 1851, Susie dawdled and missed the carriage, so to speak. The family left for the morning service without her. Evelina clearly saw this as a good punishment for her daughter, but it’s entirely possible that Susie enjoyed staying behind.

The lesson about tardiness, or, at least, the importance of going to church, didn’t stick. Ten years later, circa 1861, Susie was still finding ways to escape going to meeting. According to Winthrop Ames:*

“[M]y grandmother [Evelina] notes with suspicion in her diary that the headaches of her nineteen-year-old daughter, Susan, seemed to occur rather oftener on Sundays than on other days, especially when there was to be a second sermon in the afternoon.”*