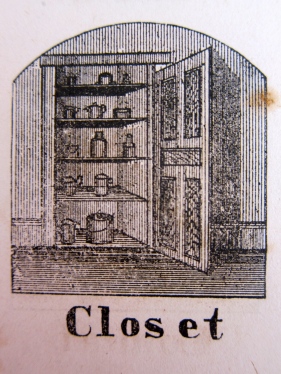 parlour this morning and has painted some drawers

to be grained, and has drawn some of the windows

in the parlour  I have been doing a little of every

thing but cannot tell what.  Have got the carpet

down in the sitting room and the dishes into the

closet and we begin to look more comfortable

The redecorating of the downstairs began to wind down and the house became “more comfortable.” Getting the sitting room back in order was a big deal, for that was Evelina’s main domain for her daily sewing. It was her office, so to speak, more so than the kitchen.  She surely had missed her sewing routine while the house was disordered.

Putting the dishes back into the sitting room closet was also an accomplishment.  Jane Nylander, modern historian of 19th century domestic life, has written of the role of that closet:

“In most substantial households, parlors, sitting rooms, and dining rooms were furnished with a closet in which were stored cups and saucers, decanters of wines, glassware, and loaves of rich fruitcake, which was prized for its lasting quality as well as its flavor.  The shelves of these closets were grooved so that the small serving plates called ‘twifflers’ could be stood against the back wall and make a handsome show when the door was opened. ”  Twifflers – great name! – were about 9 1/2″ in diameter.

While Evelina set her house to rights, her father-in-law was busy about the factory. “began to work on the Flyaway Dam to day I went to Bridgewater + caried Clark + Keith to help Mr Phillips about fixing th bellows”** What had happened to the bellows? They were key to the manufacturing process.