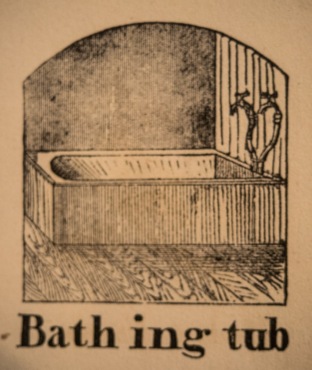 Friday Oct 17 Was working about house most of the

forenoon and have been sewing on Susans

and my dress.  Carried my work to Augustus

for a couple of hours this afternoon.  Lavinia

and Abby were there  Mr Ames has been quite

unwell for a day or two and to night has taken

a warm bath  I have written a letter to Oliver

this evening  Mr Ames sent him a check for 25 Dls.

Oakes Ames had taken ill. Had he caught the nettlerash from his wife and daughter? Or was his illness something closer to a simple bad cold? He was “quite unwell.” Whatever he had, Oakes chose to palliate his ailment with a hot bath. Did he take a sitz bath, one that would alleviate itching from a rash?

That Evelina makes note of her husband taking a bath insinuates that his bathing was something out of the ordinary, which wouldn’t be unusual for the era. Regular bathing, which for many meant a weekly bath, was only just becoming the norm, and indoor plumbing was only just taking hold in urban areas.  Unlike the image in the illustration (which was published circa 1877), most bathtubs at mid-century were still free-standing.  The bath water was poured from buckets of hot water, which had been drawn from a well or cistern or kitchen pump and heated on the stove.  (Thus the expression, “to draw a bath.”)

The Ameses were fortunate in having their own indoor plumbing, a fact we know from Winthrop Ames’s mention in his family history of a “bathing room” in the house. Was this room shared by both families, as the brick oven was?

Oakes wasn’t too ill to write a check for his son, Oliver (3), who was away at college. Evelina wrote to Oliver and perhaps enclosed the check with her letter.  Had Oliver written home asking for money?  Such a scenario is certainly time-honored.