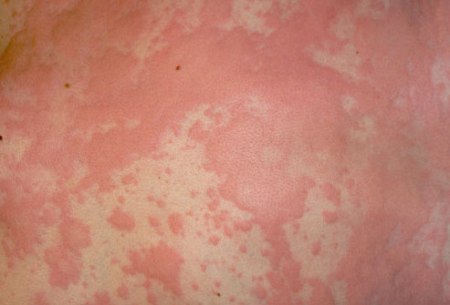 any at all and this morning we sent for the Doctor

and he pronounces it the nettle rash  She has suffered

very much to day would not let me leave her for

one moment  Mr & Mrs Whitwell are spending the

day at the other part of the house  Oakes A & Mrs

H Mitchell called there last evening and visited them

She called in to see Susan

Little Susie Ames was in agony.  She had nettle rash, a 19th century term for hives, an acute, raised rash that erupts from the skin in painful splotches. It can appear in many places on the body; Susie’s landed on her backside and spread from there. Known medically as urticaria, the condition is often symptomatic of an allergic reaction, but it can have viral or idiopathic origins, too. It’s hard to say what might have caused the nine-year old’s sudden breakout.

The poor girl’s skin itched, stung and burned, making her unable to rest or sleep without discomfort. Tending her daughter all night and day, Evelina didn’t get any rest, either, and the regular domestic pattern of the day was disrupted. A quick visit from Harriett Ames Mitchell must have been helpful, at least, in capturing Susie’s attention for a few minutes.

In the house next door, Sarah Lothrop Ames turned 39 years old today. Given the recent death of one of her brothers, it’s doubtful that any great fuss was made over the occasion. Sarah and her immediate family were probably still wearing some form of mourning apparel at this point.