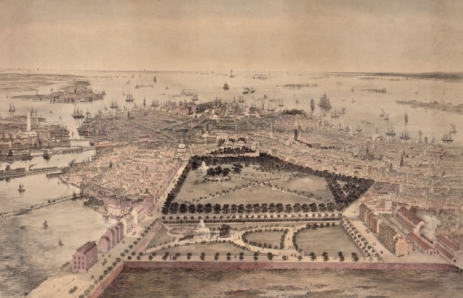 Tues 29 July  Mr Ames Susan & self were going to Boston

to day but it rains pouringly.  I am glad to see

it rain hard so that we know what to do about

going  I do not feel as disappointed as I did last

week when it cleared off so pleasant  Have been

Another trip to Boston called off by weather. Not only were Evelina’s plans put aside, but Old Oliver’s plans must have been challenged, too.  Haying had begun the day before and the rain not only obviated any further haying today, but also endangered the hay that had already been cut.

Evelina experienced an odd satisfaction today, pleased that the weather proved to be as bad as she had anticipated because it justified her choice not to go to town. Perhaps she wasn’t pleased so much as vindicated. As she had done last week, she turned to sewing and mending to fill the time that otherwise would have been spent in Boston.  Oakes Ames, meanwhile, presumably went on into the city to conduct business with various store owners who sold Ames shovels.

As the illustration above shows, Boston at this time had a much smaller perimeter than the city we know today. Back Bay was still a small bay of water, and the line of trees at the bottom of the illustration formed the western edge of the city, along the line that is now Arlington Street. The filling in of the water that would create the Back Bay grid of streets wouldn’t begin for another five or six years.