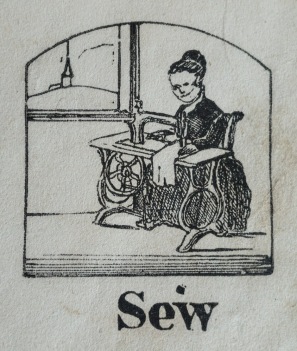 Saturday July 26th  This day is very pleasant and we should

have had fine weather to be in Boston  Mr

Ames has gone as usual  I feel quite disappointed

best  The school does not keep to day & […Susan]

is sewing some but she does not like it & I fear

she will never learn at this rate

Stuck at home when she had planned to be in Boston, Evelina was clearly sorry to have misjudged the weather and missed the trip. Oakes was in town and she wasn’t, and she had little choice but to turn to her sewing.  She coped with her disappointment by handing it over to providence and accepting the change of plans as “for the best.” God knew better than she did.

Susan Ames was possibly less philosophical about the change of plans.  Her mother put her to work sewing, for which Susie had neither inclination nor aptitude.  In an era when society decreed that a “woman who does not know how to sew is as deficient in her education as a man who cannot write,”* Susie was expected to acquire at least the fundamentals of needle and thread whether she liked it or not.

Neither Susan nor her mother could know that mechanical machines for sewing would soon be introduced that would obviate hand-sewing. The illustration above, from 1877, a quarter-century later, suggests how readily the sewing machine would replace hand-sewing and how quickly the production of clothing would become an industry.  Although bespoke clothing would never disappear, and many women for personal or economic reasons would continue to sew their own clothes, ready-to-wear clothing would become more and more available in Susie’s lifetime. No one in the Ames sitting room could envision that development on this sunny summer Saturday ten years before the Civil War.