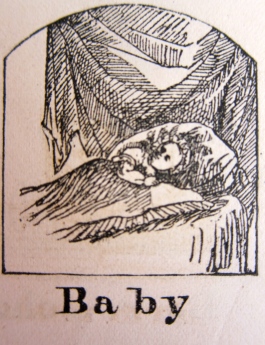 July 21st Monday  Worked about house all the forenoon

This afternoon have been to work on the

lounge.  Put some tufts on the side of the

matress & nailed some haircloth on the inside

of the lounge  Augustus has another son

born to day  He called here about four

Oclock to tell me the news.

Hannah Lincoln Gilmore, wife of Alson Augustus Gilmore, gave birth today to her second child, a baby boy soon to be known as Willie. This was good news.

We shouldn’t be surprised that Evelina noted only the arrival of the little boy and said nothing of Hannah’s labor and delivery. Most middle- and upper-class people at that period would have avoided explicitly describing childbirth. At most, if mentioned in public, the delivery would have been referred to simply as the mother’s “sickness.” Elizabeth Cady Stanton, describing the easy birth of her fourth child in 1851, wrote “I was sick but a few hours.”*

Most women, especially in small towns and the countryside, delivered their babies with the help of a midwife, who was often assisted by female relatives; this was still true in Easton.  A new trend, however, especially in urban areas among the wealthier population, was to request the attendance of a physician at delivery. As a modern historian notes, “Fear of pain, permanent injury, or death, willingness to defer to the demands of fashion, the belief that birth posed special dangers to affluent, well-bred women, and the availability of doctors, private nurses, and new medical technology all contributed to changing attitudes.”*  Doctors began to appear bedside as women – especially rich women – gave birth.

We don’t know if Hannah got through her “illness” with the help of a physician. But as reported by her husband Augustus,  she and little Willie were resting by the end of the day.