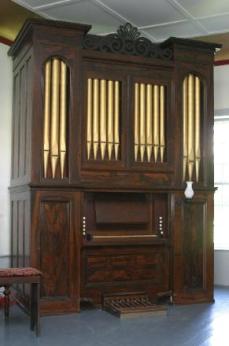 June 5th Thursday  To day I have been to Mothers, stoped at Orinthias

school and staid about an hour, left Susan there

and got to Mothers about noon.  Met A Augustus & wife

and her sister Elizabeth, John Pool & wife.  On my way

home stoped to Miss Louisa Howards & got some Asters

and at the meeting house to hear Elizabeth Clark play

Several Ameses gathered this afternoon with others for a concert at the meeting house. Presumably, the new organ was featured again, played this time by a more proficient organist than Mr. Rotch from a few Sundays ago. Miss Elizabeth Clark, daughter of Daniel and Elvira Clark and barely 19 years old, treated the listeners to a recital. The Clarks were Unitarians, and Daniel was a capable carpenter who did occasional work for the Ames family. Elizabeth was evidently a fine pianist.

The new organ was possibly made by E. G. and G. Hook of Boston, whose factory was later in Weston, Massachusetts. Known by 1885 as Hook and Hastings, their firm was prominent in the 19th century in the production of church organs. Their first concert hall organ, no longer extant, was installed in the Tremont Temple across from the Boston Common. Their largest was placed in Boston’s Cathedral of the Holy Cross.  More common were smaller organs such as the one in the illustration that were installed in more modest meeting houses, like the Easton one used by the Unitarians in 1851.

The occasion for this particular recital is unknown, and how it came to be held on a weekday afternoon is also a puzzle.  It made sense to the townspeople, however, who turned out in full for the occasion.