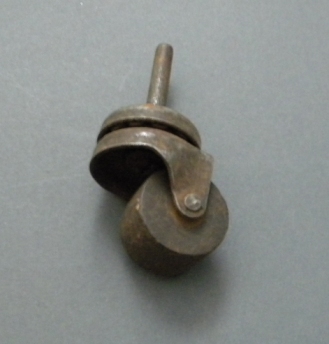 Tues May 27th  My beadstead was brought this

forenoon  It is very pretty but much to large shall

have it made shorter.  Have had the center table

lowered & new castors put on it.  Put straw carpet in

Franks chamber and it is ready for him to come back

into.  Have not sewed any to day I seem to have been

busy but have not accomplished much for a long while

Redecorating continued.  Not only had things been cleaned and painted or papered, but new furniture was being brought in, and old furniture reconfigured.  Casters, beloved of Victorian housewives, were put in place so that furniture could be rolled for better cleaning.

What prompted Evelina’s burst of refurbishment? New wallpaper, new carpet, new furniture. Did she do some redecorating every spring or was this a departure from the norm? It may be that the new expenditures were relatively recent and stemmed from the increasing prosperity of the Ames shovel business as well as a contemporaneous, burgeoning access to material goods that had once been scarce. In other words, with American manufacturing on the rise,  Evelina and Oakes – and Sarah Lothrop and Oliver Jr. – could now afford and obtain desirable textiles, furnishings and decorative items for their homes.  They went to Bridgewater, Boston and New York, and bought.

One thing was certain. Evelina wouldn’t have proceeded with any of this without Oakes’s approval.  Implicit in her purchases was his consent, tacit or enthused.  For a man who spent nothing on his personal appearance, it’s interesting to understand that he would spend money on decorating his house. It’s also curious to wonder what Old Oliver might have thought about the upgrading at the old family homestead.