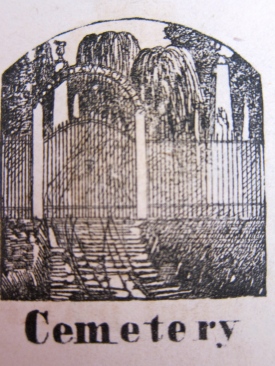 25 May Sunday  Have been to church all day. Went to Mr

Whitwells at noon with Mother and Mrs Whitwell

Louisa H.  Had quite a spirited chat about Mr

feel reconciled to having it where it is. Oakes A Susan

A cup of tea and good, “spirited chat” among the women during intermission brightened Evelina’s Sunday.  Who were Mr. Reed and Mr. Dean that they evoked such consideration from the female population?  There were several men of either name who lived in Easton at the time.

When church was over, Evelina, Oakes, Oliver Jr. and Sarah Lothrop Ames drove together to look at the new cemetery in South Easton. Created by the Easton Cemetery Corporation, it was one of almost thirty graveyards in the town.  For reasons lost to history, this newest burial-ground had been deemed desirable and consequently established by men well-known to the Ameses, including Elijah Howard and Dr. Caleb Swan.  Perhaps their intention had been to create at burial place that would be tended to as time passed, as many smaller, family graveyards throughout the town were not. Perhaps they were responding to personal inclinations to group Unitarians together for eternity.

Whatever the thinking behind the new burial-ground, Evelina was dubious.  Did she look at it and think she and Oakes might be buried there someday?  Did she wish instead to be buried near her son Henry, wherever that was? Or did she think of another graveyard where her father and certain siblings were buried? Little could she imagine that twenty-five years hence, the Village Cemetery of North Easton would be created behind a Unitarian Church that hadn’t yet been built, both projects funded by Oliver Jr, and that there she, her husband, and all her children would eventually be laid to rest.